Phthalates are used as plasticizers in soft polyvinyl chloride (PVC) and they are found in a wide range of applications such as food packaging, building materials, furniture, paints, plastics, cleaning products, cosmetics and children’s toys. Phthalates are not chemically bound to the product matrix, but are added and they can easily leach into the indoor environment and associate to dust particles. Consequently, phthalates have been analysed at high levels in the indoor air, dust, and also enter the food and water. Thus, exposure may occur through inhalation, ingestion, or contact with the skin.

Figure 1. The structure of the four regulated phthalates and the non-phthalate substitute DINCH.

There are large concerns that the phthalates might impact human health due to disruption of the endocrine system. Several animal studies have linked phthalates with birth defects of the male reproductive system, asthma and allergic reactions. Furthermore, phthalates may be involved in reprotoxicity, carcinogenesis, cardiotoxicity, hepatotoxicity and nephrotoxicity. Recently the four phthalates DEHP, BzBP, DnBP and DiBP (Figure 1) have been included into the REACH Candidate List as Substances of Very High Concern (SVHC) [https://echa.europa.eu/candidate-list-table, June 2017].

However, it is unclear to what degree indoor dust contributes to the daily intake of phthalate esters. In MiSSE we studied household dust as an exposure pathway for seven phthalate esters, the monoester MEHP, and the plasticizer DINCH which is not a phthalate as the ring is not aromatic. Household dust collected from children’s sleeping rooms (CR) and from living rooms (LR) were analysed from 12 families (Figure 2). Highest level detected in all dust samples was of the DEHP, followed by the MEHP which is a degradation product of DEHP. The phthalate substitute DINCH could also be detected at significant levels in individual samples. In general, the phthalate levels in the 12 individual households (3 household with samples from both rooms) were similar, ranging from 200 µg/dust to 900 µg/dust. This indicate a diffuse source, from several products and building materials. The levels in the Swedish households were similar to what have been reported from other dust studies in Europe. 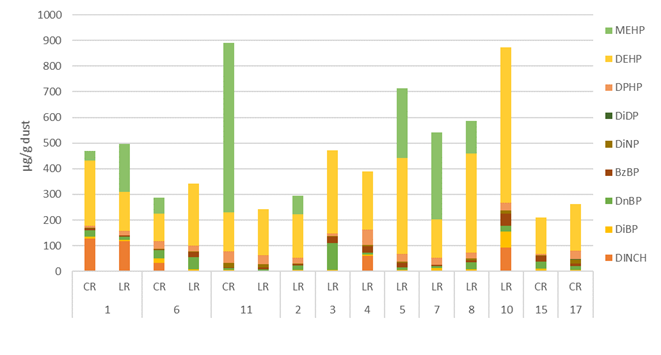 Figure 2. The individual phthalates, MEHP and DINCH levels analysed in household dust from child room (CR) and living room (LR) from 12 homes (home 1, 6, and 11 from both rooms).

To quantify the estimated daily intake (EDI) and to compare two exposure pathways, different dust particle sizes were generated from a large pool of dust from Stockholm: a respirable fraction (<5 μm) and an ingested particle fraction in the anticipated size range of skin adherence (<75 μm). Modelling of dust inhalation and ingestion showed that the daily intake of dust-bound phthalates was likely to be 2 times (inhalation) to 12 times (ingestion) higher for 21-month-old children than for adults. The EDI of DEHP and MEHP via ingestion of dust for a 21-month old is 727 and 277 ng/kg bw respectively.

Furthermore, we concluded in this study that dust may be an exposure pathway for phthalate esters as well as for the monoester MEHP, which is considered a metabolite of DEHP in organisms. We believe that microbial activity in dust can break down DEHP to MEHP, and therefore it is important to consider MEHP an environmental contaminant of its own and need to be considered in health risk assessments. We showed in MiSSE that MEHP has potency to alter the thyroid hormones by binding to the transport protein transthyretin, which DEHP is not capable of .