Several chemical analysis have been performed on the dust and serum samples collected within MiSSE. Here we report the general outcome of the analysis, and we refer to the publications mentioned in the texts to find descriptions that are more detailed. The graph (Figure 1) shows the average concentration of a selection of organic contaminants analysed in the dust samples. The average concentrations from all samples are reported on a molar basis (pmol) to better reflect the number of compounds per gram of dust, as the chemicals analysed has a broad span of molecular weight (250-1000 g/mol). 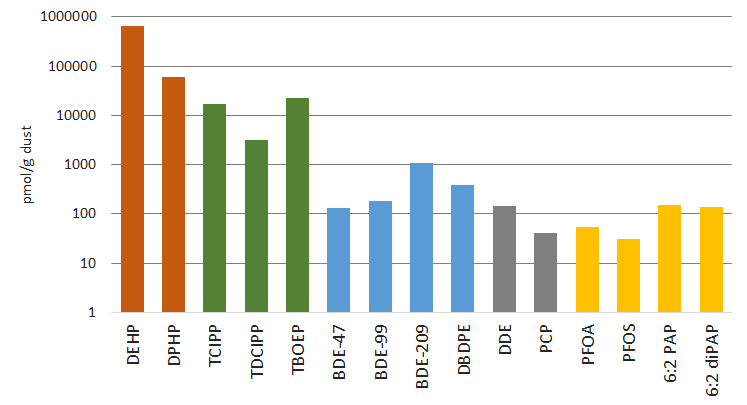 Figure 1. An overview of the concentrations (pmol/g dust) of a selection of compounds from all analysed dust samples. The five chemical groups are color coded as follow: Phthalates - red, OPFRs - green, BFRs - blue, OHC - grey, and PFASs - yellow.

The levels found in dust is dominated by the presence of phthalates, followed by the non-halogenated organophosphorus flame retardants (OPFRs). These two chemical groups are widely used in plastics, flooring, and electronics. The chemicals displayed in this graph are the ones found most frequently and at highest concentrations. DEHP, TCIPP and TDCIPP are suspected endocrine disruptors and regulated in Europe under REACH.

The brominated flame retardants (BFRs), also used ubiquitously in our common household products to decrease flammability. The major technical mixture are today regulated in Europe, i.e. the penta mixture (where the BDE-47 and -99 belongs to) and the deca mixture (mainly consisting of the BDE-209). Decabromodiphenyl ethane (DBDPE) is used as substitute for BDE-209 today, and is not regulated.

The organohalogen compounds (OHCs) are the chlorinated chemicals regulated under the international Stockholm Convention treaty on Persistent Organic Pollutants (POPs). DDE is the major transformation product of the well-known pesticide DDT, and pentachlorophenol (PCP) is a pesticide, which was commonly used as wood preservative in Sweden.

The per- and polyfluoroalkyl substances (PFASs), here represented by the two most investigated PFAS, i.e. PFOA (perfluorooctanoic acid) and PFOS (perfluorooctanesulfonic acid), plus two polyfluoroalkyl phosphates (PAPs), which are gaining more and more attention due to their prevalence and suspected toxicity. PFOA and PFOS have recently been added to the POP list under Stockholm convention.

More information regarding the chemical groups and the specific results within the project is further described in the linked sub-pages.