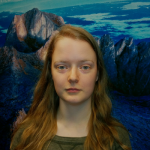 Detailed knowledge of the physical and chemical properties and sources of particles that form clouds is especially important in pristine areas like the Arctic, where particle concentrations are often low and observations are sparse. Here, we present in situ cloud and aerosol measurements from the central Arctic Ocean in August–September 2018 combined with air parcel source analysis. We provide direct experimental evidence that Aitken mode particles (particles with diameters ≲70 nm) significantly contribute to cloud condensation nuclei (CCN) or cloud droplet residuals, especially after the freeze-up of the sea ice in the transition toward fall. These Aitken mode particles were associated with air that spent more time over the pack ice, while size distributions dominated by accumulation mode particles (particles with diameters ≳70 nm) showed a stronger contribution of oceanic air and slightly different source regions. This was accompanied by changes in the average chemical composition of the accumulation mode aerosol with an increased relative contribution of organic material toward fall. Addition of aerosol mass due to aqueous-phase chemistry during in-cloud processing was probably small over the pack ice given the fact that we observed very similar particle size distributions in both the whole-air and cloud droplet residual data. These aerosol–cloud interaction observations provide valuable insight into the origin and physical and chemical properties of CCN over the pristine central Arctic Ocean.

The amount of ice versus supercooled water in clouds is important for their radiative properties and role in climate feedbacks. Hence, knowledge of the concentration of ice-nucleating particles (INPs) is needed. Generally, the concentrations of INPs are found to be very low in remote marine locations allowing cloud water to persist in a supercooled state. We had expected the concentrations of INPs at the North Pole to be very low given the distance from open ocean and terrestrial sources coupled with effective wet scavenging processes. Here we show that during summer 2018 (August and September) high concentrations of biological INPs (active at >−20°C) were sporadically present at the North Pole. In fact, INP concentrations were sometimes as high as those recorded at mid-latitude locations strongly impacted by highly active biological INPs, in strong contrast to the Southern Ocean. Furthermore, using a balloon borne sampler we demonstrated that INP concentrations were often different at the surface versus higher in the boundary layer where clouds form. Back trajectory analysis suggests strong sources of INPs near the Russian coast, possibly associated with wind-driven sea spray production, whereas the pack ice, open leads, and the marginal ice zone were not sources of highly active INPs. These findings suggest that primary ice production, and therefore Arctic climate, is sensitive to transport from locations such as the Russian coast that are already experiencing marked climate change.

To constrain uncertainties in radiative forcings associated with aerosol–cloud interactions, improved understanding of Arctic cloud formation is required, yet long-term measurements of the relevant cloud and aerosol properties remain sparse. We present the first long-term study of cloud residuals, i.e. particles that were involved in cloud formation and cloud processes, in Arctic low-level clouds measured at Zeppelin Observatory, Svalbard. To continuously sample cloud droplets and ice crystals and separate them from non-activated aerosol, a ground-based counter-flow virtual impactor inlet system (GCVI) was used. A detailed evaluation of the GCVI measurements, using concurrent cloud particle size distributions, meteorological parameters, and aerosol measurements, is presented for both warm and cold clouds, and the potential contribution of sampling artefacts is discussed in detail. We find an excellent agreement of the GCVI sampling efficiency of liquid clouds using two independent approaches. The 2-year data set of cloud residual size distributions and number concentrations reveals that the cloud residuals follow the typical seasonal cycle of Arctic aerosol, with a maximum concentration in spring and summer and a minimum concentration in the late autumn and winter months. We observed average activation diameters in the range of 58–78 nm for updraught velocities below 1 m s−1. A cluster analysis also revealed cloud residual size distributions that were dominated by Aitken mode particles down to around 20–30 nm. During the winter months, some of these small particles may be the result of ice, snow, or ice crystal shattering artefacts in the GCVI inlet; however, cloud residuals down to 20 nm in size were also observed during conditions when artefacts are less likely.

New particle formation in the Arctic atmosphere is an important source of aerosol particles. Understanding the processes of Arctic secondary aerosol formation is crucial due to their significant impact on cloud properties and therefore Arctic amplification. We observed the molecular formation of new particles from low‐volatility vapors at two Arctic sites with differing surroundings. In Svalbard, sulfuric acid (SA) and methane sulfonic acid (MSA) contribute to the formation of secondary aerosol and to some extent to cloud condensation nuclei (CCN). This occurs via ion‐induced nucleation of SA and NH3 and subsequent growth by mainly SA and MSA condensation during springtime and highly oxygenated organic molecules during summertime. By contrast, in an ice‐covered region around Villum, we observed new particle formation driven by iodic acid but its concentration was insufficient to grow nucleated particles to CCN sizes. Our results provide new insight about sources and precursors of Arctic secondary aerosol particles.

In the central Arctic Ocean the formation of clouds and their properties are sensitive to the availability of cloud condensation nuclei (CCN). The vapors responsible for new particle formation (NPF), potentially leading to CCN, have remained unidentified since the first aerosol measurements in 1991. Here, we report that all the observed NPF events from the Arctic Ocean 2018 expedition are driven by iodic acid with little contribution from sulfuric acid. Iodic acid largely explains the growth of ultrafine particles (UFP) in most events. The iodic acid concentration increases significantly from summer towards autumn, possibly linked to the ocean freeze-up and a seasonal rise in ozone. This leads to a one order of magnitude higher UFP concentration in autumn. Measurements of cloud residuals suggest that particles smaller than 30 nm in diameter can activate as CCN. Therefore, iodine NPF has the potential to influence cloud properties over the Arctic Ocean.