When three’s not a crowd: vapour cocktail drives new particle formation in the upper troposphere 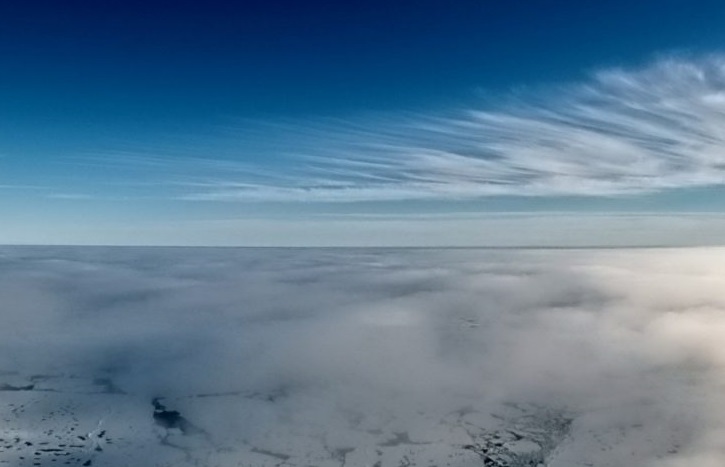 Newly-formed particles are important for cloud formation and are persistently observed over almost all regions of Earth’s upper troposphere. However, the vapours and mechanisms that drive the formation of these particles are not well understood. Now, a new study by an international team of researchers, including scientists from the Department of Environmental Science, published in Nature, presents a new mechanism via a synergy between nitric acid-, sulfuric acid- and ammonia vapours for extremely rapid particle formation and growth that may be an important source of new particles in the upper troposphere. The new findings can inform pollution policies and improve future climate projections.

Particle formation processes are important because they can influence cloud formation processes, contributing to present uncertainties in climate predictions. Under the right conditions, gas molecules in the upper troposphere condense together into small clusters that can grow, eventually forming aerosol particles. If these nanoscale particles grow even just a small amount larger, they can function as cloud condensation nuclei or CCN, which are essential for cloud formation. Particle formation in the upper troposphere is thought to generate a significant fraction of global CCN. It is well known that sulfuric acid can form such small particles, but alone it is inefficient to account for all CCN present. Scientists have long suspected that additional vapours such as ammonia and organic compounds must be taking part in new particle formation. 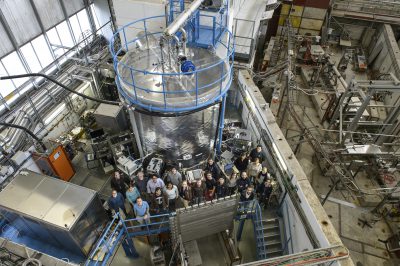 To test this idea, the international team behind the new study simulated upper tropospheric conditions in the CLOUD chamber at CERN, Switzerland, and studied the formation and growth of new particles from novel mixtures of vapours. They observed “extremely” rapid particle formation and growth in the upper troposphere via an unexpected synergy between nitric acid, sulfuric acid and ammonia vapours. These three vapours together formed new particles 10–1,000 times faster than sulfuric acid–ammonia nucleation alone. Once particles had formed, co-condensation of ammonia and abundant nitric acid alone was sufficient to drive rapid growth to larger sizes where they could potentially form clouds. The resultant particles – even with trace amounts of sulfuric acid as low as 1% – were highly efficient CCN, comparable to the most efficient CCN known in the atmosphere.

“In principle, any two of the three compounds considered in the study, namely nitric acid, sulfuric acid and ammonia can nucleate at moderate nucleation rates if combined together under low temperature, but it was unexpected that the combination of all three vapours can lead to such a high nucleation rate,” says Roman Bardakov, a Ukrainian post-doctoral scientist at the Department of Environmental Science and co-author of the study.

Roman Bardakov together with Professors Ilona Riipinen (Department of Environmental Science) and Annica Ekman (Department of Meteorology) were the scientists from Stockholm University involved in the project. They contributed to the study by modelling the transport of ammonia from the atmospheric boundary layer – the bottom layer of the troposphere that is in contact with the surface of the earth- to the upper troposphere by deep convection. The work was funded by the European Research Council project INTEGRATE and Horizon 2020 project FORCeS which are coordinated by Ilona Riipinen and Annica Ekman. 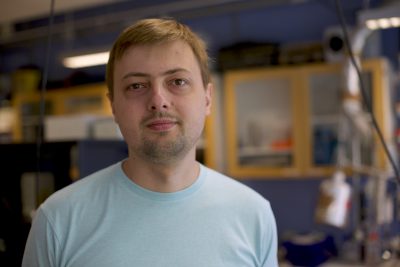 In the upper troposphere, while sulfuric acid is scarce, nitric acid is abundant from lightning and ammonia, which originates from surface emissions – livestock and fertilizer, – is carried aloft by convective clouds and then released when droplets freeze.  The atmospheric concentrations of all three vapours were much lower in the pre-industrial era, and each is likely to follow different trajectories under future air pollution controls.

According to the authors, the new mechanism may be the dominant source of new particles in areas of the upper troposphere where ammonia is efficiently transported by convective clouds, such as over the Asian monsoon regions. When the scientists modelled the global distribution of the particles formed from this synergistic mechanism, they found that the particles can spread across the mid-latitude Northern Hemisphere, influencing Earth’s climate on an intercontinental scale. For that, the new CLOUD results could inform policies for anthropogenic pollution as well as improve the ability of global models to predict future changes in the climate.

More about aerosols and their role in climate

Atmospheric aerosol particles cool the climate by reflecting sunlight and by forming more numerous but smaller cloud droplets, making clouds brighter and more long-lasting. Accurate projections of climate change are limited by the uncertainty in how much aerosols and clouds have increased since pristine pre-industrial times and how they may continue to change in the future as anthropogenic emissions are reduced.