“We do not have the time to waste!” 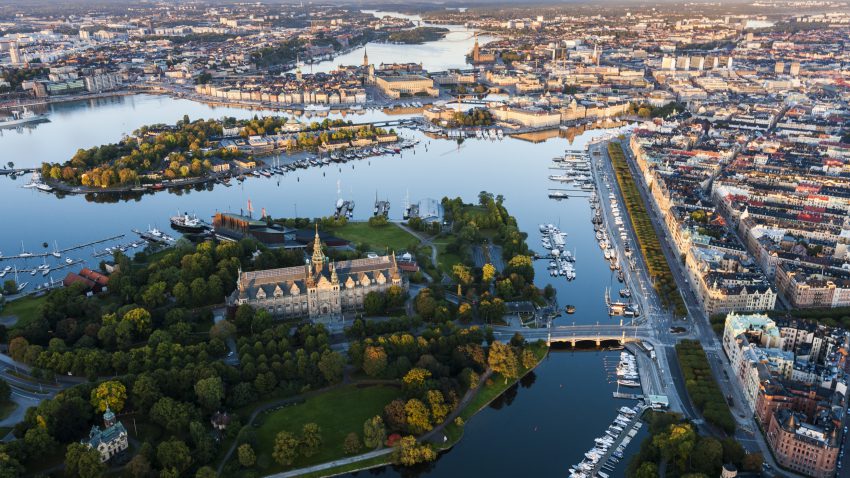 Science has an important role to play in the transition to a sustainable society. But more cooperation is needed and decision-makers must act faster on incorporating scientific evidence into meaningful policies. These were the key messages at the international sustainability conference hosted by the three main  universities in Stockholm and Stockholm Environment Institute. 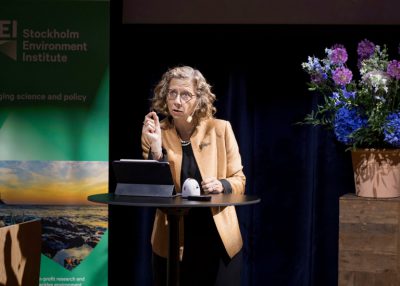 “Science is like a canary in a coalmine. The time between the canary warning us and us reacting is too long,” said Executive Director of UNEP Inger Andersen.

Watch Inger Andersen´s keynote address “The role of science in the transformation to a more sustainable world”.

On 1 June, in conjunction with the 50th anniversary of the first environmental conference of the UN, Stockholm University, KTH Royal Institute of Technology, Karolinska Institutet and Stockholm Environment Institute held a one-day conference at Albano campus that focused on how scientists and academia, through research and education, could support sustainable transformations for a better future.

The conference “Sustainable planet, sustainable health – how science-based solutions can drive transformative change” boasted a distinguished international speaker- and panelist lineup, including His Excellency Dr. Moghweetsi E.K Masisi, President of the Republic of Botwana and the Under-Secretary General of the United Nations Inger Andersen, as well as representatives from academia, NGOs, student associations and the industry. The event was hybrid with approximately 400 participants at the venue and attendees from around the world participated and interacted online. 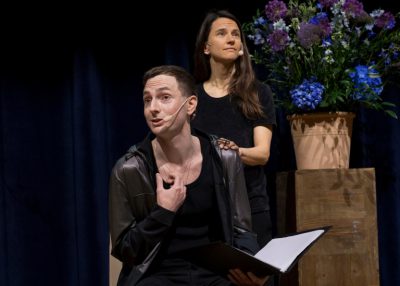 Razmus Nyström and Melinda Kinnaman from The Royal Dramatic Theatre of Sweden (Dramaten) performed parts of the play “We Hear You—A Climate Archive.”

At the opening, two actors from The Royal Dramatic Theatre of Sweden (Dramaten) performed parts of the play “We Hear You—A Climate Archive” with texts by the Swedish climate activist Greta Thunberg among others. The play was inspired by Thunberg’s famous quote “Can you hear me?,”which was taken from her address to members of the British Parliament on 23 April 2019, formed the core of the performance.

The play was followed by an opening plenary session where the presidents of the three host universities and Deputy Director of Stockholm Environment Institute Åsa Persson responded to Thunberg’s question. Their response was “Yes, we hear you!” On a side note, Åsa Persson admitted that Thunberg’s words made her uncomfortable. 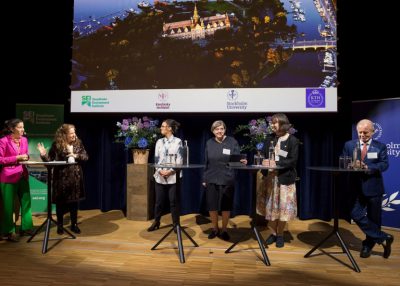 The university presidents and SEI head of research Åsa Persson together with the moderators Noura Berrouba and Annika Dopping.

The university presidents stressed that universities have a responsibility to act in accordance with the global development goals. They also pinpointed that the three universities have complementary research and expertise that create opportunities to influence society through what is taught to students and through established collaborations with external societal actors.

Need for a new green revolution 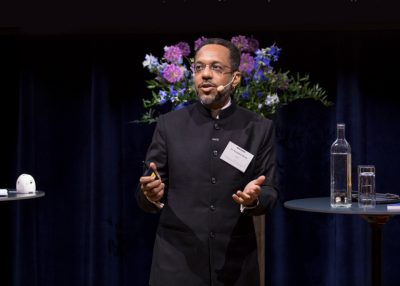 The first keynote speaker of the opening plenary was Dr Arunabha Ghosh, Founder and CEO, Council on Energy, Environment and Water (CEEW) in India. He began by showcasing the work of Svante Arrhenius, Nobel laureate and professor at Stockholm University, who was as one of the first researchers to describe the greenhouse effect in the late 19th century. Since then, science has helped us understand how human activities impact climate and the environment as well as showing us how to overcome problems. Dr Ghosh gave several examples on how to roll out renewable energy across India and the work his team has done to develop a map of climate risk prone areas in India. His message on how we can achieve transformative change was that we need a new green revolution whereby harmony with nature will guide our investments on energy that are most effective. 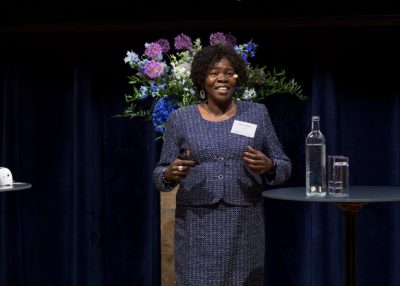 Nyovani Madiset from Malawi talked about the demographic dividend in Africa.

Climate change has had huge effects on health

Andy Haines, Professor of Environmental Change and Public Health, London School of Hygiene and Tropical Medicine, gave a talk by link from London entitled “Health in the Anthropocene.” He listed challenges for research and action, like complex systems, delayed effects and policy silos. He also showed that climate change already has had huge effects on health. One example is that more than 35 percent of total deaths between 1990-2018 are attributed to human induced climate change, according to data from 43 countries.

Besides climate change, there are several interconnected factors putting pressure on the environment, like loss of biodiversity, overfishing  and others. Professor Haines argued that we have to rely more on nature based solutions, like keeping and restoring ecosystems. He also stressed that there are enormous opportunities for science to take part in the sustainable transformation process.

Important to engage youth in the transformation 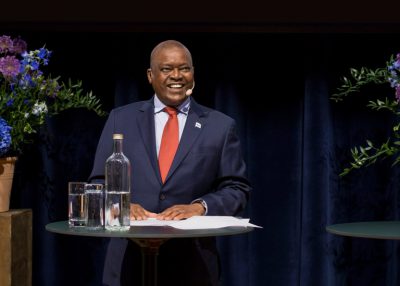 HE Dr Mokgweetsi E.K Masisi, President of the Republic of Botswana.

Next keynote speaker, His Excellency Dr Mokgweetsi E.K Masisi, President of the Republic of Botswana, gave several examples of how science have helped dealing with societal problems, like fighting several diseases, such as the ongoing Covid19 pandemic. His Excellency also emphasized the importance of engaging youth in sustainable transformation and the role of partnerships: “Partnerships make the world a better place. Young people are a wonderful resource to be harnessed.”

In the panel discussion that followed, His Excellency President Mokgweetsi E.K Masisi was joined by Teruo Fujii, Professor and President of University of Tokyo, and Noura Berrouba, President of the National Council of Swedish Youth Organisations.  Noura Berrouba stated young people support science. “We see the scientific community as our ally.” She called for more platforms where young people can connect with the scientific community. His Excellency President Mokgweetsi E.K Masisi emphasized the need for enhanced connection with academia in the transformation process. At University of Tokyo dialogue is considered a core value, said President Teruo Fujii and added that there is a need to involve more people in the dialogue between science and society. When asked for advice on how academia should act in the transformation, Noura Berrouba responded: “Be an ally to us, as we are an ally to you. Let there be dialogue.” 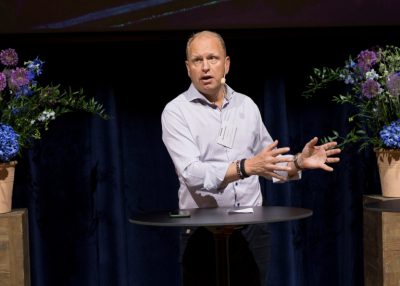 Henrik Henriksson delivered the industry perspective on the transformation to sustainability. He is former CEO of the vehicle manufacturing giant Scania and now leads H2 Green Steel as its CEO, a new company building a green steel plant in northern Sweden. His take on how the industry sector can transform was that sustainability and profitability go hand in hand and that companies today have to build sustainability into their core values. He added that science is necessary as the basis for transformation and that companies must operate with society and the planet in mind.

“We do not have the time to waste”

Inger Andersen, Under-Secretary-General of the United Nations and Executive Director of the United Nations Environment Programme UNEP, attended the conference in-between sessions at the Stockholm+50 conference and meetings with prime ministers and other dignitaries. She delivered a passionate speech on how science has transformed our lives and how we, in turn, must transform science to help us tackle the planetary triple crises, namely climate change, nature and biodiversity loss, and air pollution. “Science has delivered much for humankind but we also have to be aware of problems created by science, and that there is need for swift responses. Science is like a canary in a coalmine. The time between the canary warning us and us reacting is too long,” she said.

According to Inger Andersen, we must use science and technology wisely. There is also a need to make science accessible (open science) and improve the science-policy interface. She stressed the importance for transdisciplinarity and collaboration with other parts of society. For science to support a sustainable transformation, Inger Andersen said that there is need to narrow the timeline between science and action and to ensure that solutions work in harmony with nature. “We do not have the time to waste,” she cautioned.

Young generation as agents of change 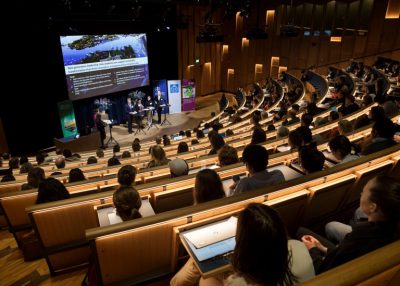 A panel consisting of students from the three universities and Henrik Henriksson discussed future leadership models and how academia can support sustainable transformation. An issue raised during the discussion was that of insufficient interaction between disciplines. Students asked for more guidance from the universities about how they could widen the scope of their studies with the help of other complementary disciplines.

Henrik Henriksson called for better interaction between academia and industry. He added that students today expect companies to have a sustainability action plan in order to become attractive. “If you have company core values rooted in the 1940s, you are not attractive as an employer,” said Henriksson.

The panel stressed that the young generation can be the agents of change. Ossian Ahlkvist from the Student Union of KTH summarized this as follows: “We have to remember that we can change the world – and we have to act!”

During the day there were four parallel sessions: