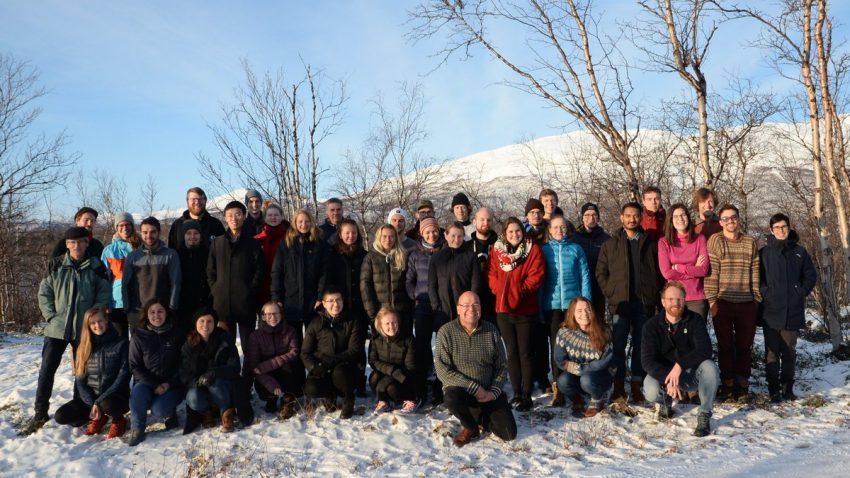 A week of atmospheric science combined with steamy saunas, brave winter dips, and day hikes in one of Sweden’s most pristine national parks was on offer at Abisko Scientific Research Station in northern Sweden in October. It can’t get any better than this, according to students who attended the course “eScience for linking Arctic measurements and modelling.”

”By e-science we are refering to new open-source tools that can be used to analyze and visualize datasets such as measurements or climate model data. Since these tools are open-source, reproducibility, collaboration and credibility in science are guaranteed,” says Paul Zieger, Assistant Professor at ACES and organiser of the eScience course in Abisko.

During the course, and with the help of eight teaching assistants, twenty-six PhD- and Masters students from Swedish-, Finnish-, Danish-, German-, and Norwegian universities used open source software, and computer packages to compare empirical measurements with model predictions of aerosol-related variables focusing on aerosols and Arctic climate.

The course included seminars led by six teachers who also discussed ongoing research at Abisko Research Station. “The students were asked to prepare scientific reports of their findings for which they will hold presentations at their respective universities,” says PhD student Sigrid Bakke from the University of Oslo.

The Arctic surroundings of Abisko Research Station tempted the students into participating in a variety of other activities as well. “During our free time, we enjoyed saunas at the station and afterwards the bravest of us took a swim in Torneträsk lake. We also went for a hike in the national park and watched the Northern Lights at night,” says Herman Fuglestvedt, PhD student at the University of Oslo.

True to form, the organisers encouraged the students to offset their carbon footprint by traveling to Abisko and back by train. “We saved an estimated total of 12 tonnes of CO2!” says Franziska Hellmuth, PhD student at the University of Oslo.

“eScience for linking Arctic measurements and modelling,” held at Abisko Research Station on 17-24 October, was the third in a series of courses on climate science at high latitudes. The series is part of Nordic eScience Globalisation Initiative (NeGI), and a collaboration between University of Helsinki, Norwegian Meteorological Institute, the Finish IT Center for Science and Stockholm University, the latter being responsible for the Abisko course this year. Funding was mainly provided by Nordforsk, but also The Bolin Centre for Climate Research, Arctic Avenue, CHESS and FORCeS.

ACES was this year’s main organizer of the course at Abisko Research Station. Several PhD students, one Masters student, and teachers from Stockholm University participated.

You can find photos and social media posts related to the course using #negi2019.

Reports from the previous courses can be found here: