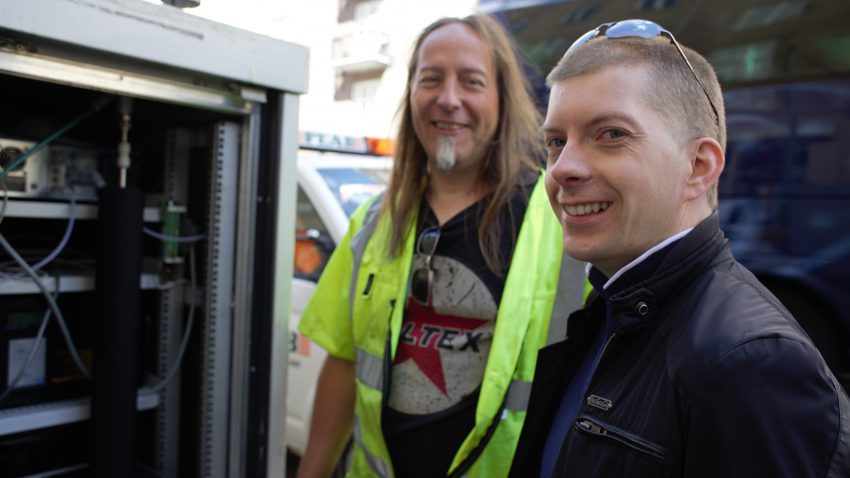 Time to examine the measurement station for air pollution at Folkungagatan, Stockholm. Billy Sjöwall, technician at Stockholm Air and Noise Analysis (SLB analysis), has met up with Alexander Håkansson from the Department of Environmental Science and Analytical Chemistry (ACES). Photo: Annika Hallman

How much nitrogen oxide or asphalt particles are there in the air at a certain location in Trelleborg, Sundsvall or Stockholm? This is something that is recorded by different measurement stations located in urban environments around Sweden. But is the measurement station located in the right place along the street? Are the instruments approved? Researchers at ACES make sure that the measurements meet the requirements.

The plastic funnel on top of the two meter tall grey metal cabinet on Folkungagatan in Stockholm reveals that this is not a regular cabinet.

“Through the funnel, the air is drawn into tubes and carried down to the instruments so that we can measure different air pollutants”, says Alexander Håkansson, Project Manager at the Swedish Reference laboratory, Department of Environmental Science and Analytical Chemistry (ACES). 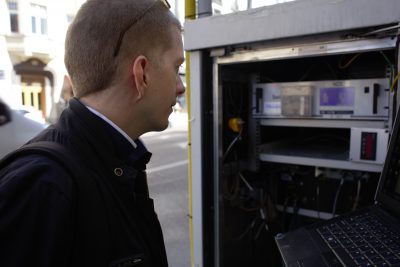 Nitrogen oxides are measured in real time in one part of the cabinet. The numbers are constantly changing. Photo: Annika Hallman

Even though the morning rush should be over, there is a lot of traffic this morning. Several buses have stopped in front of the red light at the intersection towards Götgatan and a car queue has been built up.

“It’s a bit messy now because of the construction works at Slussen, all buses from Värmdö have to take this road into the city for a while”, says Billy Sjöwall, technician at Stockholm Air and Noise Analysis (SLB analysis), a department that works with the environment within the municipality of Stockholm. He is here once a week to inspect and take care of the instruments.

The cabinet on Folkungagatan is a measurement station for air pollution and has recently been given a new location along the street. Alexander Håkansson is here to audit that it is properly placed and that the instruments are approved and fit for purpose.

“There are rules for how the measurement should be done and my role is to ensure that the requirements are met and to provide advice and tips.”

It is a requirement of the EU that all member states should have comparable measurements of air pollution. In Sweden, municipalities handle all air monitoring in urban environments. The Swedish Environmental Protection Agency (Naturvårdsverket) is responsible for the work and has given ACES the task of being the national reference laboratory for urban air, which means ensuring that the municipalities meet the requirements and that the measurements can be compared with other places both in the country and in the rest of the EU.

“ACES has served as a national reference laboratory for around 20 years now, so we have a great deal of knowledge about it”, says Alexander Håkansson. 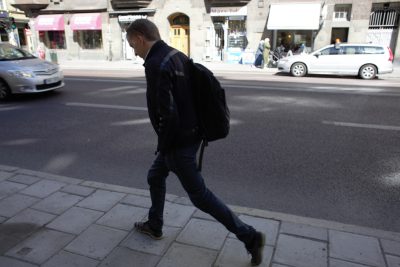 How far is it to the intersection? Alexander Håkansson examines the distance. Photo: Annika Hallman

The measurement station on Folkungagatan measures for example the amount of particles in the air, called PM10, that are smaller than 10 micrometer in size.

“PM10 may be particles from road wear, asphalt, sand and gravel. The instrument in the cabinet separates all the larger particles while the PM10 is stuck on a filter. If there are lots of particles, it is an indication of poor air quality ”, says Alexander Håkansson and examines the instrument.

“Here it says that the instrument has model number ‘1400 A’, what is the difference between A and AB?”

“AB is a later version of the instrument with more reliable parts, our instrument was originally an A but then upgraded to an AB”, says Billy Sjöwall.

In another part of the cabinet, nitrogen oxides are measured, which come from combustion in engines and are harmful to the respiratory tract. All data is transferred to a computer in the cabinet. A screen displays numbers and tables that are constantly changing, the air quality is measured in real time.

“The program calculates an average every quarter, hour and day and all is then transferred to our database in the office at Kungsholmen”, says Billy Sjöwall.

Alexander Håkansson looks at the tube that belongs to the instrument that measures nitrogen oxides to determine if it is too long.

“If it is too far between the intake and the instrument, the pollution level can change along the way, but all the instruments in this cabinet are approved and provide reliable measurements”, he says.

The most common pollutants in urban environments are sulfur dioxide, nitrogen dioxide, particles and ozone. Every year, the municipalities report the amount of air pollution to the Swedish Environmental Protection Agency, which then reports to the EU.

“If a municipality has exceeded the thresholds for an air pollution, the so-called limit values, then they will have to take actions in reducing the pollution levels”, says Alexander Håkansson.

“Right here on Folkungagatan, I don’t think you have so many exceedances, there are other streets in the city that have more heavy traffic, such as Hornsgatan and Sveavägen”, says Alexander Håkansson, and adds that most municipalities often know what kind of problems they have.

“The work with air quality measurements is always in dialogue with the Swedish Environmental Protection Agency. It is in everyone’s interest that the air is getting better, but of course, different municipalities have different levels of ambition.”

After examining the instruments, it is time to go through the checklist for the location itself. How far is the distance to the intersection? How high up from the ground is the intake? Alexander Håkansson begins to step the distance along the street.

“The distance to a major intersection should be at least 25 meters, so that the measurement station represents the entire street and not just the intersection where the cars often start and stop”, he says.

The distance meets the requirements and the height of the intake – that should not be placed more than 4 meters from the ground – is also approved. The measurement station should also be placed at least half a meter away from a facade so that it is not too protected, and this place looks fine.

He began to visit municipalities in 2017 when the Swedish Environmental Protection Agency wanted to investigate whether Sweden lived up to the EU requirements. In most cities, there is one measurement station, but some cities have more.

“In many places, the measurements are done by the environmental office, and the responsibility often lies with an official who also has many other tasks. They may not be experts on air pollutions and how to measure them, so my task is to support them, provide advice and also educate if necessary.”

In total, Alexander Håkansson has visited 40 stations from Trelleborg in the south to Sundsvall in the north. The target for 2018 is to visit an additional 10-15 stations, several of which are located in northern Sweden. The data derived from these measurements are used for research and statistics, and provide basis for policy decisions or, for example, detailed plans for building new residential areas.

“It is good to compare air quality over time. As with the discussion about reducing the number of diesel cars to improve the air, it’s good to measure whether such a change leads to better air quality. Or in connection with major infrastructure projects, in the future, we may see if the construction of the West Link in Gothenburg has meant a change of air quality there”, says Alexander Håkansson.

More information about the Swedish Reference laboratory can be found here: http://www.aces.su.se/reflab/

Do you want to see how much air pollution there is in a certain location in or around Stockholm? The City of Stockholm continuously publishes air quality data for different locations: www.slb.nu