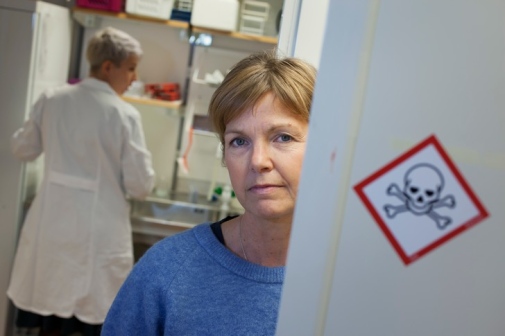 Throughout life, we are exposed to complex mixtures of chemicals that could potentially harm us in various ways. Whose responsibility is to regulate these chemicals and what should be done about it? Christina Rudén, Professor at ACES, was appointed by the Swedish government to provide answers to these questions and has now submitted her findings in a newly published report.

With the help of current legislation, concentrations of well-known harmful chemicals have fallen in Europe, both in humans and in ecosystems. However, the use of chemicals whose effects are not yet known has increased rapidly in recent decades. Today, a mixture of chemicals is found in virtually all samples taken from humans and the environment.

Emissions have shifted from high concentrations of individual chemicals to lower concentrations of a multitude of complex mixtures of different environmental toxins referred to as a chemical cocktail. It is now established that the combined effects of such a cocktail frequently have a greater impact on us and nature than those of a single substance.

The inquiry shows that major changes need to be made to the current chemical control system. In the report “Future chemical controls”, eleven recommendations for action are presented.

“To ensure a high level of protection for humans and the environment, coordinated action is required at different levels and within different parts of the regulatory system. It will take time and cost money and must be seen as a complement to everything else that is already being done today,” says Christina Rudén who has led the inquiry.

One part of the inquiry focuses on the chemical cocktail effect and on how to make more relevant risk assessments to protect human health and ecosystems. In practice, it is impossible to identify and test all imaginable chemical mixtures and therefore models are needed that can predict how toxic chemicals will be when mixed. Risk assessment methods do exist but more research is needed on the actual composition of the mixtures. In cases where there is no data, the inquiry recommends the assessment should be based on a standard scenario. Similar models are already being used for individual chemicals such as, for example, models to ”translate” risks for mice into risks for humans.

In the report, Christina Rudén proposes a new model for the assessment of chemical mixtures. Although the results are imprecise and not entirely reliable, the model is relatively easy to implement to quickly reduce risk.

The other part of the report focuses on groups of substances that have similar structure and characteristics. A chemical structure can be changed, given a new name and, thereby, no longer be classified as toxic, even though the effects may be the same as those of the original substance. According to the scientists, this is something that needs to change. Instead, decisions must be made for entire groups of substances and not single substances.

“A lot of work is already being done regarding the grouping of chemicals and this needs to be reinforced, clarified and communicated. A simple measure could be to put a warning flag on the chemicals that belong to the same group as other chemicals that are already documented as being harmful,” says Christina Rudén.

The inquiry’s recommendations for action are:

In March 2018, the Swedish government ordered an inquiry based on the incentive to take a holistic approach on the risks posed by chemical mixtures. Christina Rudén was appointed as the special investigator. She brought together a team of experts consisting of Thomas Backhaus (professor, University of Gothenburg), Per Bergman (lawyer and former General Counsel at the Swedish Chemicals Agency), Dr Linda Molander (Public Health Agency), Dr Michael Faust (independent environmental consultant) and Dr Daniel Slunge (economist, University of Gothenburg). The investigators have also consulted a number of experts in Sweden and abroad, from different government agencies, industry, the academic community and various non-governmental and environmental organisations.