Saving Resources Socials: a student-led initiative towards a greener university 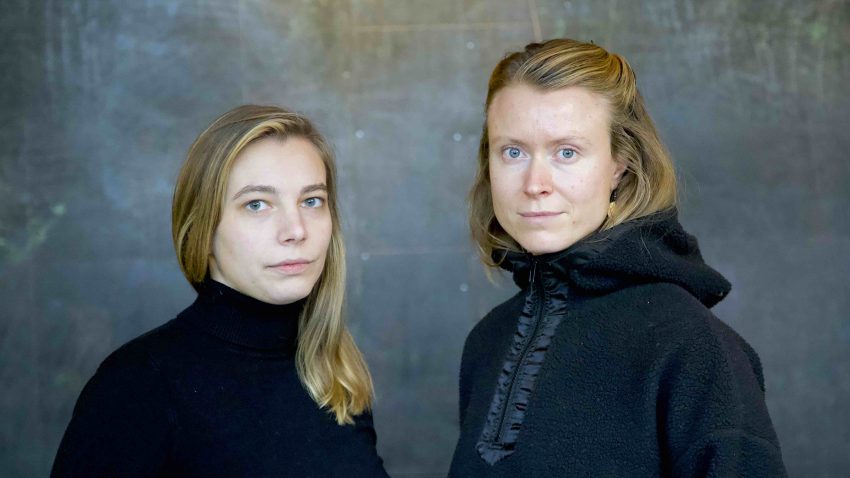 It’s 3.30pm on November 3rd and there is unusually high activity taking place in the kitchen on the 4th floor of the Geosciences Building, Frescati. Sounds of furniture being dragged are interspersed with quick verbal exchanges in German. Sophie Steigerwald and Flora Borchert, who are PhD students at the Department of Environmental Science, are getting the room ready for the first edition of the five-part event series Saving Resources Socials that they have planned and organised together. With only thirty minutes left to kickoff, the duo whiz by the combined tables, laying out books and tailor-made flyers, and unwrapping boxes containing assortments of mouth-watering desserts from a Stockholm-based vegan bakery.

Shortly before 4pm, the participants arrive, among them students, admin staff, and senior research staff such as Assistant Professor Marlene Ågerstrand, and Head of Department Professor Magnus Breitholtz. Everyone is curiously inspecting the room before making their way to the designated table at the back where coffee and cakes are served. In the meantime, Borchert pulls down the projection screen and turns on the projector. As the light hits the screen, the headline “Saving Resources Socials: actions towards a greener university” appears, towering over the gathering.

“Welcome everyone to the first edition of Saving Resources Socials,” utters Sophie with a warm smile, her eyes scouring the faces of the participants for acknowledgement. The audience mumble fades quickly. She has everyone’s attention. 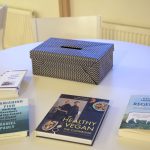 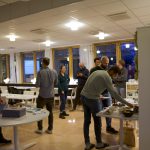 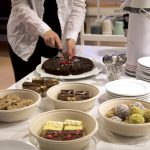 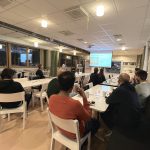 Alongside her PhD studies, Sophie Steigerwald acts as chairperson of the PhD council at the Department, which often entails attending meetings at the Stockholm University Student Union (SUS). It was during one of these meetings that she had a lightbulb moment. A funding opportunity for SUS members to support events geared towards a “greener university” resonated deeply with what she and her friend and colleague Flora Borchert had long been engaged in.

“Look at the state of our world today,” pointed out Borchert. “We’re educated people living in one of the richest countries in the world. We’re not making use of this privilege that allows us to make conscious decisions on our consumption.” She paused to glance over at Sophie who was nodding in agreement. “For example, we both think that what we choose to eat every day has one of the biggest impacts on the planet,” added Borchert. 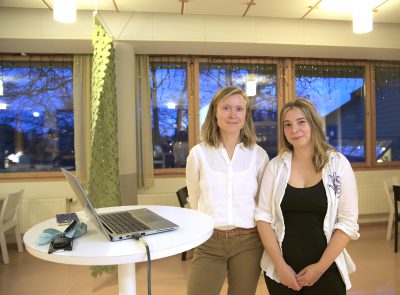 The pair submitted an application that included a description of the activity and a budget proposal. They decided to focus on the topic of modern food production practices, spread over three out of the five proposed socials, with the remaining two being “hands-on” activities, such as a plant- and clothing swap. To their surprise and delight, their application was successful.

“Everyone is learning, so are we!”

With the short introduction now behind them, Steigerwald passes the torch to Bochert who has been tasked to present the event’s “conversation starter”: a well-researched PowerPoint package with scientific facts about the environmental consequences of animal farming supported by charts and figures from the referenced studies. Though detailed and fact-heavy – nothing this audience cannot handle! – Borchert negotiates the topic skillfully, and even succeeds in distilling the material down to a handful of key messages. Nevertheless, she puts forward a disclaimer that the material in the presentation has rather been intended for stirring up dialogue and encourage own research as neither she or Sophie are experts in the respective research fields.

“Everyone is learning and so are we!” admits Borchert openly to the participants.

And with that statement, the presentation ends and the floor opens for a general discussion. Marlene Ågerstrand and Magnus Breitholtz are the first ones to engage in conversation, which centres around the University’s strategies to reduce the impact of its activities on the environment. Breitholtz, who chairs Stockholm University’s Environment Council, mentions that ordering only vegetarian food for official events, an initiative spearheaded by the Department of Environmental Science, is one of many university-wide policies towards zero net emissions by 2040. Afterwards, many others join in the conversation, which touches upon broader topics such as how strong the effect of culture is on personal food choices or whether insects could replace meat as a sustainable protein source in the future. The group discussion continues in a wave-like fashion, alternating between bursts of dialogue and moments of silent reflection, until 5pm when the event draws to a close. 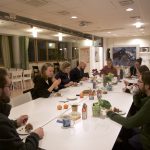 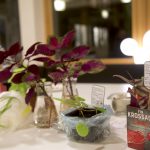 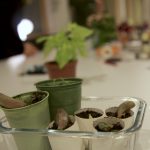 A forum for dialogue, not judgement

Although Steigerwald and Borchert are both vegans, they insisted that Saving Resources Socials was not designed to point the finger at people who choose diets different to theirs.

“I think it’s good to remember that we don’t have to give our 100% for change to happen. Every little helps. Saving Resources is all about exchanging ideas, receiving inspiration and learning about all the small things we can do. Our scope is not to pass judgement on people’s choices, but to have a constructive dialogue,” said Sophie with an unmistakable look of determination. A moment later her features softened somewhat. A new thought had crossed her mind.

“We hope that these meetings will be an opportunity for people to truly reflect on the choices they make in their daily lives and not only discuss the abstract science behind them,” she concluded.

Past and future Saving Resources Socials

The pair have already run three out of the five events under November and December. These included two dialogue sessions about the environmental- and health impacts of animal farming and a plant swap event. The remaining two, one dialogue session on ethics and a clothing swap, are scheduled for January 2023.