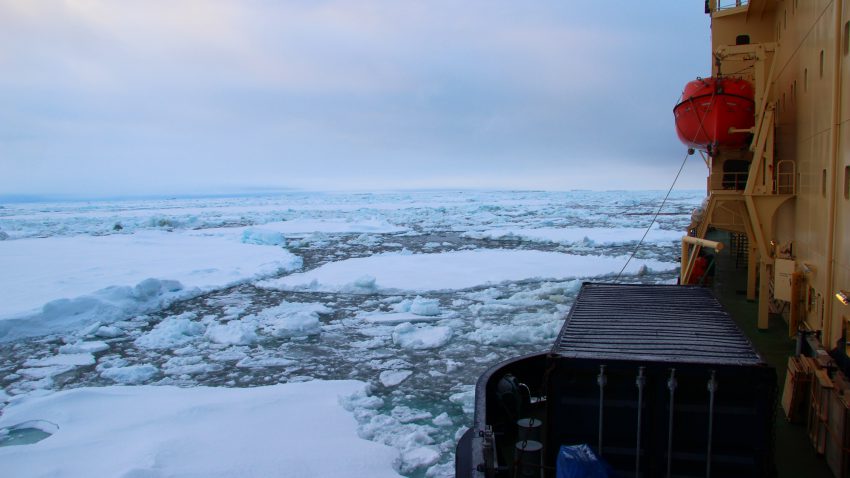 The ice breaker Oden will be moored to a large ice floe in the middle of the high Arctic Ocean, close to the North Pole for at least one month. Foto: Jan-Ola Olofsson

The 1st of August sees the start of the Swedish-American research expedition Arctic Ocean 2018. Forty researchers from all over the world will be based and work on board the Swedish icebreaker Oden whilst moored to a moving ice floe. The overall theme of the expedition is the formation of clouds. Clouds play a very important role in the Arctic climate but a key question is to what extent they are affected by microbiological life in and beneath the ice?

The Arctic climate is changing faster than anywhere else in the world with the Arctic ice pack shrinking at an alarming rate. As such, a better understanding of how climate change affects the Arctic is a key question. 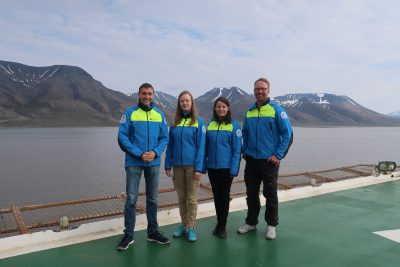 “This expedition is a collaborative effort between leading international research institutes in Sweden, the US, Switzerland, Canada, Germany and the UK. So it has been a long and intensive process to get to this point but now we are really excited to finally conduct our research”, says Paul Zieger, atmospheric physicist and assistant professor at ACES, who is taking part in the Arctic Ocean 2018 expedition.

Clouds play an important role in our climate as they regulate the amount of solar radiation that reaches the surface of the Earth and, in turn, this impacts the freezing and melting of the sea ice. Clouds are made up of small water droplets and ice crystals that form in certain wind, moisture and temperature conditions. The condensation and formation of cloud droplets requires the presence of small atmospheric particles or aerosols in the atmosphere. The aerosol particles present in the Arctic atmosphere may originate from microbiological life in the sea and ice. This could result in an important feedback – changes in Arctic sea ice extent will likely impact the amount of locally sourced aerosols including biological particles, a process that may lead to increased cloud formation and the ice freezing earlier in the season. This is a focus of the research that will be conducted during the expedition.

“It is our hope, that we can get a better handle on exactly how many aerosol particles are being produced by bubbles bursting at the sea surface and whether these particles are at all important in cloud formation in the high Arctic”, says Matthew Salter, aerosol physicist, and part of the team from ACES.

The ice breaker Oden will be moored to a large ice floe in the middle of the high Arctic Ocean, close to the North Pole for at least one month. During this time, various research teams with different areas of specialisation will remain on board, taking measurements and collecting vital statistics from the sea, ice and air. Together, the different research projects aim to provide a better insight into how the varying sections of the complex Arctic system are linked together.

“Since the sea ice extent on the Atlantic side of the Arctic is extremely low this summer it will likely be challenging to find an ice floe that is stable enough for us to moor to for a month. Thus, it may take us up to seven days to find a suitable location to moor the ship”, says Paul Zieger.

The researchers return from their expedition at the end of September.

About the expedition
More information about Matthew Salter’s and Paul Zieger’s research within the project can be found here: https://www.aces.su.se/research/projects/microbiology-ocean-cloud-coupling-in-the-high-arctic-moccha/

Arctic Ocean 2018 is a combined US and Swedish effort that includes 40 researchers from around the globe. The expedition is funded by the Swedish Polar Research Secretariat, the US National Science Foundation (NSF) and Vetenskapsrådet (VR). The project at Stockholm University is a collaboration between the Department of Environmental Science and Analytical Chemistry (ACES) and the Department of Meteorology (MISU). Linn Karlsson, a PhD student at ACES and Julika Zinke, a master student at ACES, will also be part of the team from ACES.

Learn more about and follow the expedition via the Swedish Polar Research Portal:
https://polarforskningsportalen.se/en/arctic/expeditions/arctic-ocean-2018

Read more about the ice breaker Oden on the website of the Swedish Maritime Administration:
http://www.sjofartsverket.se/en/Maritime-services/Winter-Navigation/Our-Icebreakers/Research-VesselIcebreaker-Oden/

About ACES research
Read the article “Connecting the sea to the sky: an ice-drift expedition in the high Arctic during summer 2018” with a longer interview with Paul Zieger and Matt Salter.

Once departed from Svalbard on 1st August, it will be difficult to keep in contact with the researchers. Please contact anna-karin.landin@polar.se and jan-ola.olofsson@polar.se who will be able to contact members of the expedition.