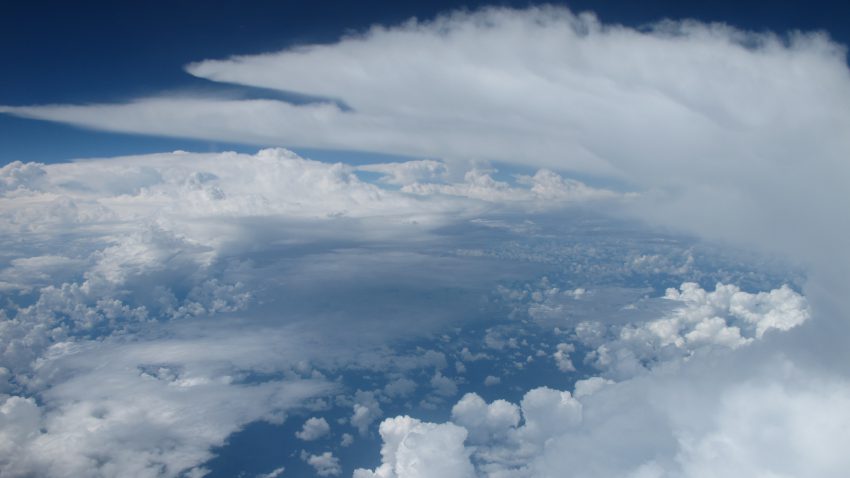 Thunderstorm clouds over the western part of the Amazon rainforest. Photo: Radovan Krejci

In the skies above the Amazon, large numbers of small air particles called aerosols that form naturally in the upper atmosphere are carried to the lowermost part of it, known as the boundary layer, by rapid downdrafts associated with rain convective clouds. This shows a new study by scientists from USA, Brazil, Sweden, Germany and Finland published in Nature. These findings shed new light into how new clouds form above pristine tropical rainforests in the Amazon.

Clouds are key players in shaping Earth’s climate and due to their complex distribution and properties they represent the largest uncertainty in future climate predictions. Every cloud is made of trillions of small cloud droplets or ice crystals. At the core of each cloud is an aerosol particle acting as a seed onto which water vapour condenses. Aerosol particles from natural or manmade sources can be directly emitted to the boundary layer or form via a process known as new particle formation, whereby molecules of certain gases stick together to make new particles when conditions are favourable. The exact mechanism of new particle formation in pristine tropical forests had puzzled scientists for years.

“Clouds and rain clean the boundary layer and are generally seen as a sink for aerosol particles. Here we show that raining convective clouds are also a source of new aerosols in the boundary layer by providing a transport route from the upper troposphere” says Radovan Krejci, researcher at ACES and one of the authors of the study.

The scientists measured the number and size of particles at various altitudes several kilometres above a pristine region of the Amazon rainforest using a research airplane as part of the GoAmazon project.

The airborne data together with data from a wide range of instruments on the ground allowed the scientists to study how particles and wind profile change during and after rainfall. Specifically, the team found that small air particles that had previously resided in the upper atmospheric layers had moved to the boundary layer after the storm, pointing towards the downward movement of the air or downdrafts being the mechanism behind the shift.

Additional analyses confirmed that downdrafts carried sufficient numbers of small particles from the lower free troposphere to the boundary layer to create a fresh population of particles essential for the formation of new clouds.

Tropical rainforest ecosystem heavily depends on rainfall. The intensity and distribution of rainfall are primarily driven by clouds.

“Our findings add to our understanding of how the biosphere interacts with the atmosphere and water cycle in pristine tropical rainforests. It is a complex puzzle of interlinked processes, which we are still trying to understand, and where there are many new surprising findings waiting for us ahead,” says Radovan Krejci.