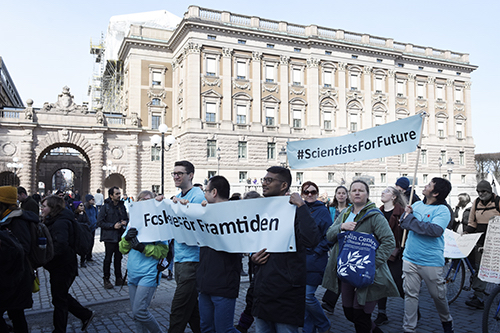 On 25 March, climate demonstrations under the international environmental movement Fridays for Future took place around the world. In Stockholm, thousands of people gathered outside the Swedish Parliament building and marched towards Tantolunden in the centre of the city. Several researchers from Stockholm University were there to show their support.

“I am here because the climate issue is high on the agenda at the university, says Magnus Breitholtz, Chairman of the Environmental Council and Head of the Department of Environmental Science. While engagement of individuals in this issue is incredibly important, Magnus Breitholtz stresses that robust climate policy is key in tackling this challenge. For example, he has high hopes for Fit for 55, the most comprehensive reform package ever put forward to reduce the European Union’s greenhouse gas emissions. The aim is to implement the EU’s climate law and reduce net greenhouse gas emissions by 55 percent by 2030 compared to 1990. 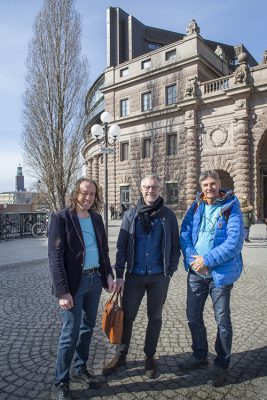 “A lot has happened in the climate area in the last four years. At the university, we have had a climate roadmap for a couple of years now to achieve carbon dioxide neutrality by 2040, and the commitment among employees and students is admirable but it still remains that the whole society must change,” says Breitholtz. He continues: “Stockholm University and other Swedish higher education institutions must act on the basis of the knowledge that we generate and become a driving force in society.”

The current scientific knowledge on climate change was recently presented by the UN’s intergovernmental panel on climate change (IPCC) in their 6th Assessment Report published on 28 February. Paul Glantz, Associate Professor at the Department of Environmental Science, who also attended the demonstration, says that the IPCC delivered their starkest warning to date in their report, as summarised in the following: “We must act now if we are to prevent climate change from having catastrophic consequences for humans, animals and nature.”

Paul Glatz is a member of Researchers Desk – a non-profit organisation that aims to facilitate the dialogue between researchers and the general public, schools and decision-makers. It was formed following the call from Greta Thunberg and other young people to “listen to the researchers.”

“We researchers have been aware of the human impact on the climate for several decades, but now it is no longer about risks in the distant future but in distant places. We already see changes today and we experience them up close. It is therefore important to drastically reduce our greenhouse gas emissions. Greta Thunberg and the other striking young people have understood this. That is why we support their demands,” says Paul Glantz.