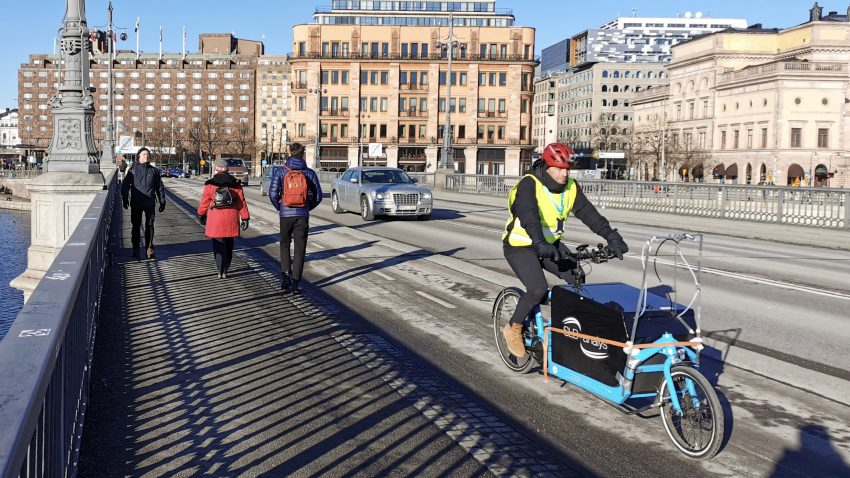 Laith Al-Qudah, a Master’s student in environment and health protection (MHS) at the Department of Environmental Science, recently presented his thesis, for which he measured air quality along heavily congested commuter routes for cyclists in Stockholm. The project was carried out in collaboration with SLB Analys at the Environmental Administration in Stockholm. Al-Qudah is himself an avid cyclist, which was one of his main motivations behind this choice of topic for his Master’s thesis. 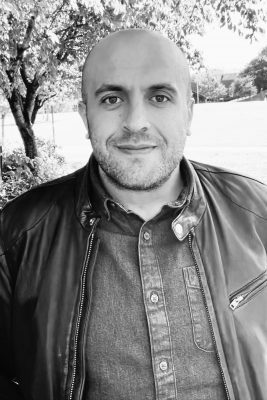 “Since I cycle year-round, I have long thought about what the risks are for cyclists exposed to air pollution. In Stockholm, people often cycle very close to traffic and are very exposed to pollution. Resolving this issue concerns a variety of actions related to climate, health, politics but also traffic planning,” says Laith Al-Qudah.

Al-Qudah carried out air quality measurements back in February during rush hour traffic in the morning between 07.00-09.00 and in the afternoon between 16.00-18.00. He used four different instruments to record levels of nitrogen oxides (NO2), soot particles (aka black carbon), coarse particles (10-2.5 µm), and fine particles (<2.5 µm) as well as the total number of particles dominated by the smallest nanoparticles. The instruments were placed inside a box mounted on an electric bicycle. Measurements took place along an approximately 21-km long cycling route which represented different cycling scenarios in Stockholm. A smartwatch was used to record GPS position and heart rates which were then used to calculate total inhaled air at any given location. The campaign lasted for 2.5 months during which time Laith cycled 770km in total. 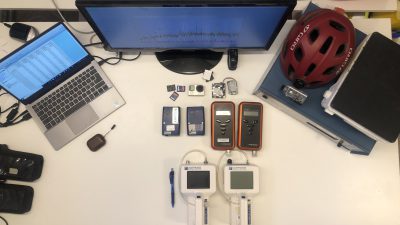 Soot- and ultrafine particles are most hazardous to cyclists

In recent years, several studies have identified the total surface area of ​​the particles deposited in the alveoli – balloon-shaped structures in the lungs – or LSDA (Lung Deposited Surface Area or LDSA) as a measure of negative health effects of aerosol particles. In his thesis, Al-Qudah shows soot- and total number of particles (mainly contributed by nanoparticles) is correlated with the highest LDSA out of all air pollutants measured. This indicates that exposure to soot- and nanoparticles emitted during incomplete fossil fuel combustion are the main pollutants of concern for cyclists’ health. 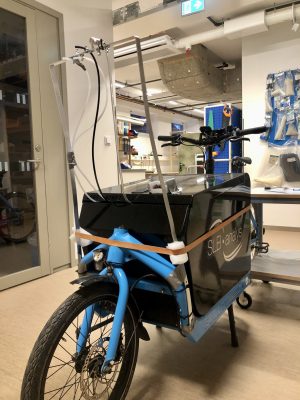 The bicycle used in this study was designed to conduct studies in air pollution and was provided by SBL Analys at the Environmental Administration in Stockholm City. Photo: Laith Al-Qudah

But the degree of exposure to these pollutants can differ depending on the type of bicycle used as Al-Qudah explains:

“If you use an electric bicycle, lung function is not affected in the same way as it is for a normal bicycle,  thanks to the motor, implying that the length of exposure is the decisive factor for how much air pollutants a cyclist is exposed to. If you use a regular commuter bicycle on the other hand, lung function will be impacted more as heart rate goes up and more air is inhaled.”

“The GIS maps revealed that air pollution levels were relatively higher in certain areas, which we need to look into to better understand the reasons for these high levels and to find solutions to reduce them when planning bicycle lanes there in the future. GIS maps also showed that both pollutant concentrations and total pollutants inhaled increased near traffic lights, which suggests that exposure could decrease if both the number of stops and waiting time for cyclists are reduced,” says Laith Al-Qudah.

He hopes that his findings will inform both Stockholm cyclists in choosing safer cycling routes and local authorities in planning safer bicycle lanes:

“We want to see more people on bicycles and at the same time offer experienced cyclists insights into air quality along the routes they use. The results could also be used as a useful planning guide for designing new bicycle lanes,” concludes Laith Al-Qudah.