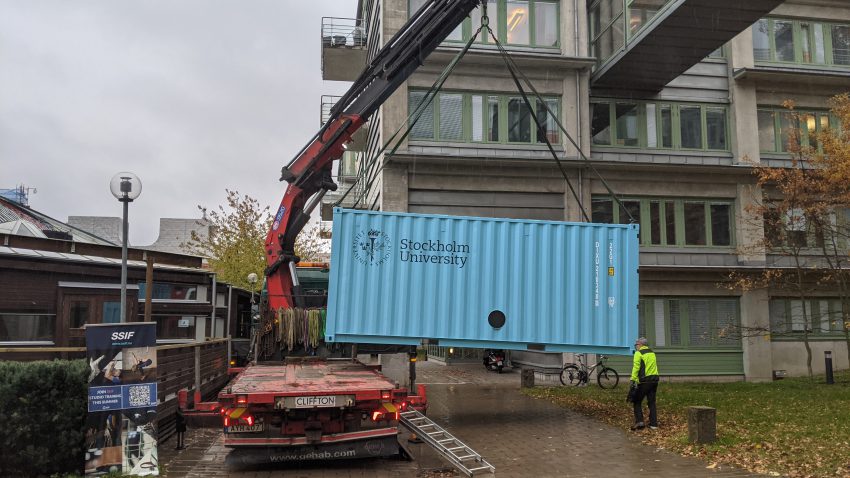 The bright blue shipping container was delivered to the Department of Environmental Science in November 2021 and since then, researchers have been converting it into a mobile lab for atmospheric research. Photo: Paul Zieger

A container equipped with instruments to measure air pollution will make its way from Stockholm University campus to the Po Valley in Northern Italy, as part of major EU-funded climate research project.

Since November 2021, researchers from the Department of Environmental Science have been preparing the bright blue shipping container, which has been a permanent feature behind the Geoscience building at Frescati campus in recent weeks, for its journey to southern Europe at the end of this month.

The researchers have been installing an array of instruments both inside the container and on its roof that will collect detailed chemical and microphysical data related to air pollution and fogs in the Po Valley in Italy. The field campaign is part of FORCeS, a pan-European research project coordinated by Stockholm University. 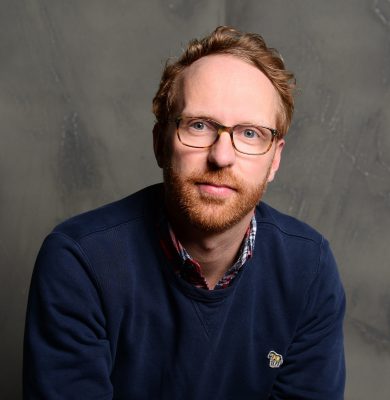 “We started planning the mobile lab a year and a half ago, for example, the design of the container, the set-up, and purchase of instrumentation. We experienced substantial delays due to COVID19, especially in getting our instruments or parts delivered on time,” says Paul Zieger, Associate Professor at the Department of Environmental Science and one of the researchers who in recent weeks has been involved in preparing the container and planning its shipment. Paul Zieger and Claudia Mohr, who is also an Associate Professor at the Department of Environmental Science, are co-leading the field campaign in Italy.

The Po Valley in Northern Italy is one of the most polluted areas of Europe. Fog is a relatively frequent phenomenon in the Po Valley during the autumn and winter months but it has markedly reduced over the last 30 years. To understand why that happened, the field campaign will study the physical and chemical properties of aerosol and fog droplets present in the Po Valley.

“The fogs in the Po Valley are quite famous. They are influenced by emissions of anthropogenic particles due to the extensive pollution in that heavily industrialized part of Europe. The reduction of the fogs in the Po Valley is likely the result of air pollution measures and climate change,” says Zieger. He continues: “The campaign data will be used for all kind of modelling, ranging from small- to large-scale models. We are also using this opportunity to deploy and test new instrumentation used in atmospheric research. The site is especially interesting, since researchers from Stockholm University have studied fogsthere since the late 80s,” says Paul Zieger.

On 31 January the container will be loaded onto a truck that will take it to Italy. Three days later the truck will arrive in the Po Valley, where Paul Zieger and his colleagues from the Department of Environmental Science will collect it. The container will stay in the Po Valley for two months along with a scientist from the Department who will ensure the smooth running of the measurements and to troubleshoot potential operational hiccups. The data feeding will also be monitored remotely from Stockholm University.

State-of-the-art instrumentation has been installed inside the container that will collect data of particles and droplets found inside the fogs of the Po Valley. Photo: Paul Zieger

The researchers hope that the field campaign can provide more insights into the role of various atmospheric constituents on the formation of fog and aerosol particles, their removal, as well as their impact on human health. But essentially, as Paul Zieger stresses, the mobile lab is designed for studying aerosol-cloud interactions, in other words how airborne particles influence cloud properties. The campaign in the Po Valley is the first in a series of field campaigns where the mobile lab will be used in.

“The campaign in Italy will be the first campaign to study aerosol-cloud interactions followed by a campaign in La Reunion in autumn/winter 2022 to study marine and remote clouds, and in the Arctic, onboard the Swedish icebreaker Oden, in summer 2023 to study the effect of warm air intrusions or anthropogenic influence on pristine Arctic clouds and its relevance for sea ice melt,” says Zieger.

As an integral part of FORCeS, Paul Zieger and his team are closely collaborating with the Italian Research Council (CNR), the University of Helsinki, and the Swiss Federal Institute of Technology in Lausanne (EPFL) in Switzerland.

“This campaign is one of the three dedicated field missions to take place within FORCeS, which aims to understand and reduce the uncertainties associated with the climate effects of air pollutants and clouds. We are impressed by the commitment and hard work of the researchers who have been able to make this happen despite the hinders caused by the pandemic during the past two years,” says Ilona Riipinen, Professor at the Department of Environmental Science and Co-Coordinator of FORCeS. She adds that the field campaign in the Po Valley is partly funded by INTEGRATE (“An Integrated View on Coupled Aerosol-Cloud Interactions”), a project for which she was awarded an ERC Consolidator Grant in 2019.