From Gases to Clouds: recent studies provide new insights into the lifecycle of aerosols 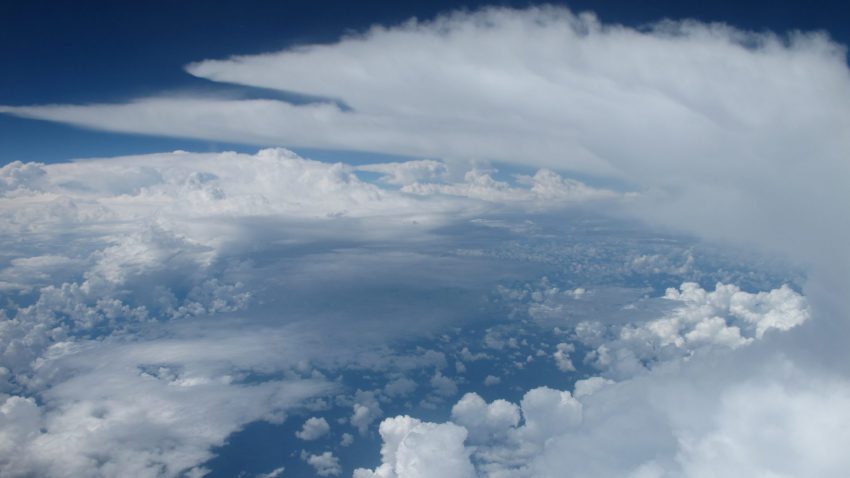 Aerosols are tiny particles suspended in the air that can affect the Earth’s climate through direct reflection and absorption of solar radiation as well as through the modulation of cloud properties by serving as seeds for clouds. They are emitted to the atmosphere directly from sources such as traffic, forests, sea spray, desert dust, and fires but can also form there by condensation of gases. The processes that govern aerosol formation, growth and ability to form clouds were the focus of three recent publications by researchers at ACES published in Nature Communications.

“When specific types of gas molecules present in the atmosphere collide and bind to each other, tiny, nanometer-sized aerosol particles begin to form. If these small clusters of molecules are able to stick together instead of falling apart again, they can grow further into larger and larger particles by condensation of vapours, especially organic vapours,” says Tinja Olenius, former researcher at ACES and co-author of one of the three studies.

Predicting the number of the initial nanoparticles that form in different environments is very challenging. In her study, Tinja and colleagues from Sweden and abroad developed a new approach to simulate the formation and growth of small molecular clusters, and applied it to air in a Boreal forest. Using this approach, the scientists were able to explain the number of nanoparticles formed from sulfuric acid and ammonia, which are common in today’s industrial atmosphere. Estimating the number of small particles is critical for predicting the climate effect of aerosols as Tinja Olenius explains: 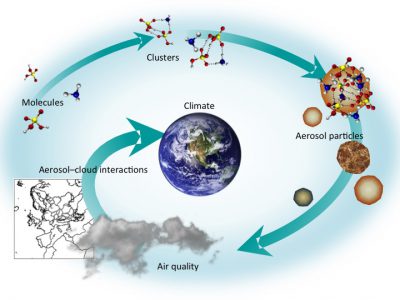 The lifecycle of aerosols

Sulfuric acid and ammonia are largely emitted by humans. Sulfur, which forms sulfuric acid in the atmosphere, is released into the atmosphere by industry and traffic, while agriculture and animal husbandry are major sources of ammonia. These vapours can also be transported to remote environments, and when combined they are able to form small molecular clusters that act as seeds for aerosol particles.

“As a source of condensable organic vapours, forests play an important role in aerosol particle growth. In the paper, we showed that in Boreal forests, sulfuric acid – ammonia particle formation was likely to reduce the number of climate-relevant aerosols,” says Tinja Olenius. She continues: “Our approach provides a new tool for predicting aerosol–cloud–climate interactions in such environments, which can help us understand better the combined effects of manmade pollutants and natural emissions from vegetation on aerosol production, and on the role of forests in the climate system.”

Just how important a role forests play in particle growth was the topic of another recently published study by ACES Assistant Professor Claudia Mohr. Since forests emit potentially condensable vapours, Claudia and her colleagues from the University of Washington in Seattle, set out to measure such vapours in the same Boreal forest as in Tinja Olenius’s study using a mass spectrometer, an instrument used to decipher the chemical composition of molecules.

“During a several week-long campaign in the spring of 2014, we observed new particle formation happening almost daily at this location, meaning that it was an important source of particles in the atmosphere,” says Claudia Mohr.

With the help of the mass spectrometer, Claudia Mohr and her colleagues identified the composition of more than a thousand molecules, and measured the changes in their concentration in real time. The molecular composition gave scientists clues as to the volatility of the molecules, in other words, how likely they are to stay as gases (high volatility) or turn into particles by condensation (low volatility). Together with colleagues from the University of Eastern Finland in Kuopio, Claudia Mohr was able to feed this information into a computer model that could calculate the rate of particle growth due to condensation and predict the composition of particles of different sizes. When they compared the modeling projections with actual measurement data they saw a near exact match.

“This is an important result, as it shows that the model can simulate the processes in the atmosphere well. In a Boreal forest environment, particles grow by condensation of organic vapours that are most likely of natural origin in a matter of hours, to sizes at which they can affect cloud formation,” says Claudia Mohr.

Aerosol particles born of and grown by the mechanisms elucidated in Tinja Olenius and Claudia Mohr’s respective studies have the potential to act as seeds for condensation of water vapour and thereby form clouds, when transported higher up in the atmosphere by upward motions called updrafts. To establish which environmental conditions favour or prevent cloud droplet formation was the focus of PhD student Samuel Lowe’s new study.

“We sought to understand the degree to which cloud formation is affected by organic compounds, namely their accumulation on the surface of aerosols. This accumulation reduces the surface tension of the particles, thus promoting cloud droplet formation,” says Samuel Lowe. Through model development and simulation, Samuel Lowe showed that the more organic material present at the particle surface, the higher the number of aerosols that grow to become cloud droplets and the smaller the cloud droplet size. These changes to the cloud droplets result in clouds that reflect more incoming solar radiation and appear whiter.

“Whiter clouds are likely to last longer in the atmosphere, and cause less rain. The theoretical findings in our study indicate that aerosol number, size and organic content, the likes of which my colleagues at ACES have reported, play an important role in the cloud brightening effect,” says Samuel Lowe.

Aerosols account for one of the greatest uncertainties in understanding climate. Besides providing new theoretical insights into aerosols, clouds, and their interactions, the ACES scientists are hopeful that their findings will have practical implications in the improvement of computer models to achieve higher predictability of climate evolution.