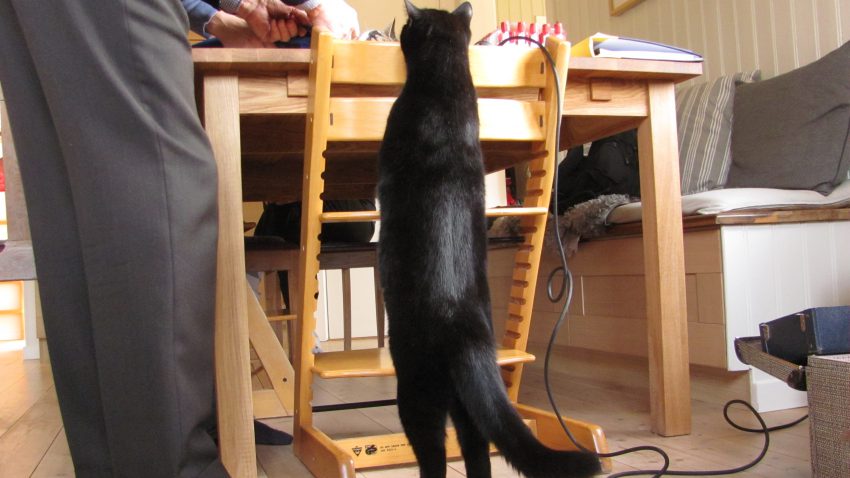 By studying the amount of chemicals in the blood of cats, it is possible to assess how the chemical exposure is for small children in our homes. Photo: Jana Weiss

“To sum up, one can say that our two main objectives have been to investigate whether dust is a source of exposure to thyroid hormone disrupting chemicals and if these can pose a threat to health”, says Jana Weiss, researcher at the Department of Environmental Sciences and Analytical Chemistry (ACES ), Stockholm University, and scientific coordinator of the project that has been running since 2012. 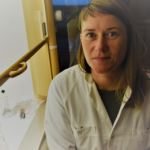 The project is called Mixture Assessment of Endocrine Disrupting Compounds (MiSSE), and has investigated how cats are exposed to chemicals through dust indoors.

“Cats can reflect the chemical exposure in our home environment because they are often indoors and are constantly grooming. By studying the amount of chemicals in the blood of cats, it is also possible to assess how the chemical exposure is for small children in our homes. Little children have a similar behaviour where they often touch things and then put their hands and things in their mouths.”

The research group selected five chemical groups that they wanted to investigate in cats and in the homes of the cats and then they used so-called paired sampling. That is, both domestic dust samples and blood samples from the cats at the same time, samples that could then be compared. Between August 2013 and March 2014, the research group conducted sampling in the Stockholm and Uppsala region, where a total of 17 families with children under ten years were visited, all households had cats.

“Through these samples, we could really confirm that cats living in homes with higher levels of certain substances in the dust also have higher levels in the blood. In this case, brominated flame retardants and so-called PFAS substances had a large variation of concentration in the home. “This means that you can influence your home by actively selecting products that do not contain these substances”, says Jana Weiss.

So far, the results of the research have shown that high levels of brominated flame retardants and PFASs measured in cats blood come from the dust in our homes.

“We wanted to focus on the mixture of chemicals with a hormone-disrupting effect that we are exposed to at home through dust. All products and furniture that we bring to our homes may emit functional chemicals, by evaporation or stripping. These chemicals were never meant to leave the products and have not been tested for how they can affect our health. We have mainly investigated the substances that may affect the thyroid function.”

Now the project has reached its final year and it is time for the group to report how the results look in terms of indoor exposure to hormone-disrupting chemicals and the possible consequences that exposure may have on human health.

“During the conference we will present the results from our different studies”, says Jana Weiss.

What are the overall results so far?

“Early we could see that cats diagnosed with goiter, a thyroid disturbances had higher levels of certain brominated flame retardants compared with healthy cats. Within the project we have been able to demonstrate that dust is a source of exposure by finding correlations between the paired samples for certain brominated flame retardants and PFAS. We also found that cat food is a source of certain phenolic substances, a chemical group that is water soluble and has the same structure as some hormones. The substances are naturally formed, of algae, in the marine environment. We believe that they end up in the cat food through fish protein that is added to the food.

Thyroid hormones are important for normal growth and development of the brain during the early years of life. A disorder in hormone levels can affect health throughout life, but is especially problematic for young children as they develop. There have been connections to various behavioural disorders such as over activity or impaired learning ability, but thyroid hormones are also involved in the development of diabetes and obesity.

“The research community agrees that we are affected by chemicals that we have introduced in our surrounding environment and to which we are exposed to. However, the question is to what extent. These are changes that we can only study at population level, not at the individual level.”

What do you hope the research can contribute to?

“We need to deal with the mixture of chemicals we have in our homes, which can affect our health by changing our hormone balance. Today, we cannot say how much this can affect us and future generations, but every new lesson can help us to better manage chemicals in the future”, says Jana Weiss.

During the conference the 23rd of August, Linda Birnbaum, Director of the National Institute of Environmental Health Sciences, USA, and Professor of University of North Carolina, and Hazuki Mizukawa, Researcher at Environmental Veterinary Sciences, Hokkaido University, Japan, will provide an international perspective on research results.

“Linda Birnbaum’s research group was the first to analyse brominated flame retardants in cat blood, and who pointed out that the first cases of goiter in cats coincided with the introduction of flame retardants in our home products. Hazuki Mizukawa makes interesting research on the metabolism of cats and how it affects how they can break down certain chemicals.”

Jana Weiss looks forward to presenting the MiSSE project for invited authorities such as the Swedish Chemicals Agency (Kemikalieinspektionen) and the Swedish Environmental Protection Agency (Naturvårdsverket) to discuss the results with researchers and other stakeholders.

“It will be an interesting day”, she says. “We have applied for more money to continue so we hope that we will be able to advance our knowledge into the next project.”

About MiSSE
The MiSSE project is a cooperation project between Stockholm University, Umeå University, Vrije University in Amsterdam and SLU in Uppsala. The project has been funded by Formas and will be completed in December 2018. Articles on the results will, however, be published even after 2018. More information about the project can be found here.