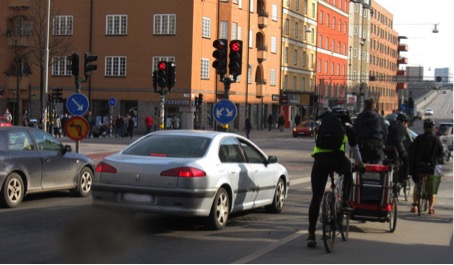 In the midst of the ongoing coronavirus crisis, traffic in major streets in central Stockholm was reduced by a fifth on average during March, report researcher from the Department of Environmental Science and pollution watchdog in the Stockholm region. Less traffic is expected to result in fewer premature deaths from air pollution this year.

As a third of the world’s population is currently under lockdown to reduce the spread of the novel coronavirus, images of deserted streets and empty once lively neighbourhoods in Europe’s iconic capitals have become symbols of a humanity on a standstill. With global economic activity ramping down as a result of the pandemic, reports have started to emerge showing that air quality in major cities globally has markedly improved due to a drop in emissions of a variety of harmful pollutants related to energy and transport.

Stockholm City’s pollution watchdog, SLB-analys at the Environment and Health Administration, has recently estimated that traffic levels in Stockholm’s inner-city were down every day between 10-35% in March compared with the daily mean of the three previous years for the same month. Unsurprisingly, the downward trend also applied to both nitrogen dioxide (NO2) and soot, when compared to the same period of the previous three years.

”Traffic on one of Stockholm’s busiest roads Hornsgatan decreased by an average of 20% in March. The levels of the different pollutants are affected to varying degrees depending on whether they are emitted by local traffic alone or combined with incoming air transported from emissions outside the city. Nitrogen dioxide and soot particles are emitted mainly by local traffic and their levels decreased in accordance with the traffic reduction in Stockholm,” says Christer Johansson, Professor at the Department of Environmental Science and Analyst at SLB-analys.

A likely drop in premature deaths in Stockholm

Between 300 and 400 people die prematurely each year in the Greater Stockholm area due to air pollution exposure. Christer Johansson expects that the drop in emissions due to reduced travel will have significant effects on public health this year.

”Fewer cars in the cities will have very large effects on air quality, not only in the city centres, but also in surrounding areas. As exposure to harmful pollutants decreases, the number of people affected by illness – or worsening of pre-existing illnesses – due to air pollution will likely be reduced. The magnitude of the effect depends on how long the decreased exposure will last. For example, if it persists for several months, there may be 10 to 20 fewer premature deaths in the Greater Stockholm area,” says Christer Johansson.

In terms of what improved air quality means for COVID19 progression and/or recovery, Christer Johannson hopes that improvements in air quality may play a positive role in the outcome of the disease.

”There are possible links between an impaired immune system and air pollution. During the Great Smog of London in 1952, many of the people who died were already sick with the flu, meaning that the air pollution episode affected their chances of recovery from the infection. As far as I know, there is currently no evidence for a link between COVID19 and air pollution. But since it is an infection of the respiratory tract, those who are already ill could be adversely affected by air pollution. We know that if one is exposed to high levels of air pollution first, the severity of, for example, pollen allergies increases. In principle, the opposite should also apply, since the risk of ill-health is lower at low exposure to air pollution, then you can have better defense against eg COVID-19. For example, air pollution can cause cardiovascular disease and diabetes, which are both risk factors in COVID-19. But to understand a link between air pollution and COVID-19, one would be looking at a long-term air pollution exposure, perhaps years, which is not the case today.”