ACESNews & FeaturesConnecting the sea to the sky: an ice-drift expedition in the high Arctic during summer 2018

Connecting the sea to the sky: an ice-drift expedition in the high Arctic during summer 2018 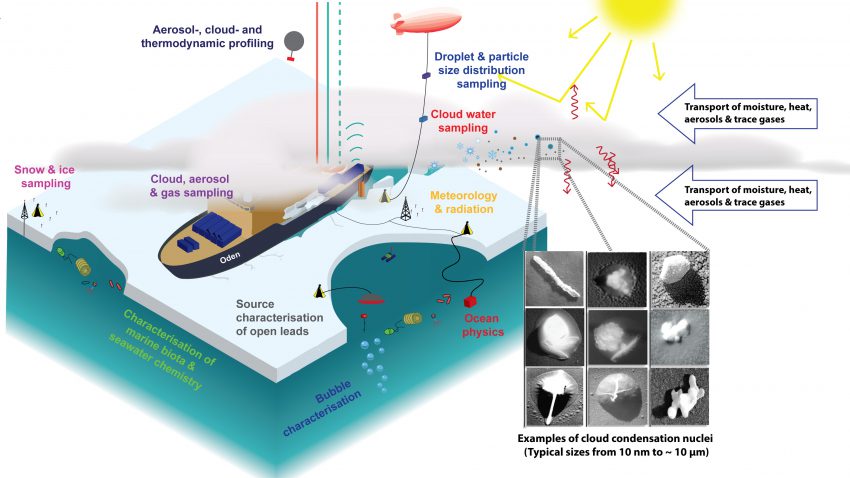 Schematic set-up of the Arctic Ocean 2018 expedition on board the icebreaker Oden. Picture: Paul Zieger

How important is marine microbiology to clouds in the summertime high Arctic and how important is this connection for climate in the region? This is a key focus of a two month research expedition that will take place in the high Arctic this summer. The planning for such an expedition takes years and the ACES researchers who are participating are currently in the midst of a hectic period of preparation.

It looks like a chubby barrel, but in black and steel, and with instruments, cables, pipes, plastic cans and computers connected to it.

”This is our sea spray simulation chamber. A similar and larger one that we call the floating aerosol chamber is currently being built for the expedition to the Arctic. We will bring it with us on the icebreaker Oden”, says Matthew Salter, aerosol physicist and one of the researchers from ACES who is going to the North Pole for a two month research expedition this summer.  The simulator stands in the aerosol lab at ACES, among lots of other instruments, electronics, tools and computers. Many of the instruments will also travel aboard the Oden.

”The new simulator will measure about 1.2 meters in diameter. Up in the Arctic we will float it in an open lead to estimate the amount of particles coming out of the water. With the floating aerosol chamber we will be able to determine things like the amount, sizes and what kind of aerosol particles are directly produced by the open leads”, says Paul Zieger, atmospheric physicist and assistant professor at ACES, who also will take part in the Arctic expedition.

They have designed the floating aerosol chamber together and are right in the middle of a hectic period of preparations.

”We are still building and testing some of the instruments and have to make sure that everything works when we are in the high Arctic”, says Paul Zieger.

”We are collaborating with many colleagues from other countries and everything has to be organized. We are very eager to go but the preparations take a lot of time”, says Matthew Salter. 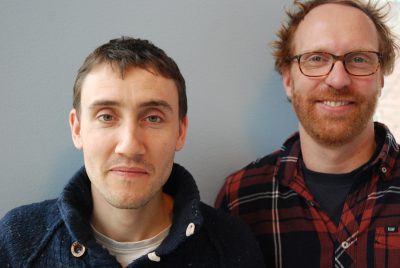 Matthew Salter and Paul Zieger, researchers at ACES, are looking forward to go to the North Pole for a two month research expedition this summer. Photo: Annika Hallman

On July the 20th the icebreaker Oden will depart Helsingborg in the southern part of Sweden before heading towards the North Pole. On the way the boat will pass Longyearbyen in Svalbard where the majority of the scientists will board. The main research will take place at more than 80 degrees north during an ice-drift operation. Here, Oden will be parked next to a heavy ice floe where it will then drift freely for around five weeks.

The expedition is a combined US and Swedish effort that includes 40 researchers from around the globe. The principle investigators in charge of the expedition are Caroline Leck, professor in chemical meteorology at the Department of Meteorology (MISU), Stockholm University, and Patricia Matrai from the Bigelow Laboratory for Ocean Science in the U.S. Linn Karlsson, a PhD student at ACES and Julika Zinke, a master student at ACES, will also be part of the team from ACES.

”The goal of the expedition is to find out more about how the clouds are connected to the microbiological life in the sea and the ice and how this connection might affect climate. Clouds play a vital role in the Arctic since they impact the amount of solar radiation that reaches the surface. Small changes in the availability of aerosol particles which act as cloud condensation nuclei can have a huge effect on the radiative properties of clouds”, says Paul Zieger.

The Arctic is very sensitive to changes, and it is a region that changes fast. What are the consequences of the dramatic loss of summer sea-ice for Arctic climate? Will the ice continue to disappear as the ocean absorbs increasing amounts of solar radiation? Or might conditions become more favorable for biological activity and associated cloud-formation, decreasing the amount of solar-radiation at the surface? These are some of the key questions that the researchers have listed as important to answer during the project. 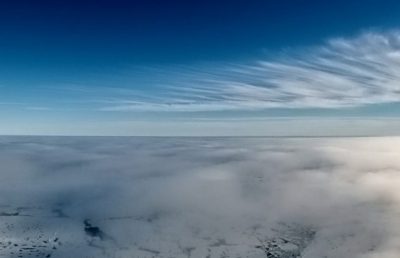 What are the consequences of the dramatic loss of summer sea-ice for Arctic climate? The goal of the expedition is to find out more about how the clouds are connected to the microbiological life in the sea and the ice and how this connection might affect climate. Photo: ACES

”We also want to find out more about the local sources of aerosols which may form in the open water often found during summer in the high Arctic. In these so-called open leads, one can observe bubbles, which burst and eject aerosols into the atmosphere above. How many particles do these bubbles produce? How large are they? Where do these bubbles come from? And how important are they in the process of forming the low-level clouds? By conducting experiments with seawater in the laboratory using our sea spray simulator we aim to understand what links the properties of bubbles to the properties of the aerosols that form when they burst. With the development of the floating aerosol chamber, we are trying to take what we have learned in the lab out to the field”, says Matthew Salter.

The sources of the bubbles and aerosol particles originating from the open leads is one focus of the researchers from ACES, another focus is the research on how these particles influence cloud formation.

”We will sample ambient aerosol particles and cloud droplets directly from the atmosphere by using specific inlet systems. These inlets will be installed on one of the upper decks on the I/B Oden. Like a vacuum cleaner, we will bring the air inside a container where we will use a large suite of instrumentation to study their microphysical properties and chemical composition. We will also use filters to sample aerosol particles and cloud droplets and analyze them later in the lab. One can say that we will bring the Arctic clouds back to Sweden”, says Paul Zieger.

Aerosol particles and droplets from clouds higher in the atmosphere will be collected from a tethered balloon that will be deployed up to a kilometer in the air. A catamaran will help the researchers to gather samples from the ocean surface.

”This will be our treasure that we bring back home”, says Matthew Salter.

The data output will probably take years to go through after the expedition, they think.

”Other researchers will work with it for many years from now. I hope that we can contribute to future findings in this way”, says Paul Zieger.

None of them have been this far north before and they are both excited to have the opportunity.

”I’m looking forward to spending two months doing concentrated research up in the Arctic”, says Paul Zieger who hopes to get the possibility to collect as many samples as he can during the expedition. Matthew Salter agrees:

”The open leads are almost green in the summer, when, for around two weeks, the Arctic ocean has its most biologically active period, before it freezes again. We want to be there when the leads are open, it is also easier to maneuver the ship before it gets too cold”, he says.

Researchers from Stockholm University have been involved in several expeditions to the Arctic over the last few years, but an expedition with a focus on aerosols and clouds has not taken place since 2008.

”What is new with this expedition is that we will have new and more sensitive instruments on board and it is these new scientific methods that we hope will provide more information about the bursting bubbles, aerosol particles and clouds”, says Matthew Salter.

One risk during the trip is that the instruments will break down because of stormy weather or other complications.

”But we will bring extra tools to mend things along with many spare parts and copies of the most important instruments”, says Paul Zieger.

To find a good location for the ship is one of the most crucial parts of the trip:

”Our research is based on samples from the open leads so it is very important that we find a place to set up near such open water. It will be a little stressful if we don’t find it”, says Matthew Salter.

But they both look quite confident that it will work. As soon as the ice is gone on the lake Brunnsviken near the university Paul Zieger and Matthew Salter will begin testing the floating aerosol chamber on the open water.

The Expedition: Arctic Ocean 2018 is funded by the Swedish Polar Research Secretariat, the US National Science Foundation (NSF) and Vetenskapsrådet (VR). The project at Stockholm University is a collaboration between the Department of Environmental Science and Analytical Chemistry (ACES) and the Department of Meteorology (MISU). The principle investigator in charge of the expedition from Stockholm University is Caroline Leck, professor in chemical meteorology at MISU.

More information about the expedition can be found at the Swedish Polar Research Secretariat.

More information about Matthew Salters and Paul Ziegers research within the project can be found here.