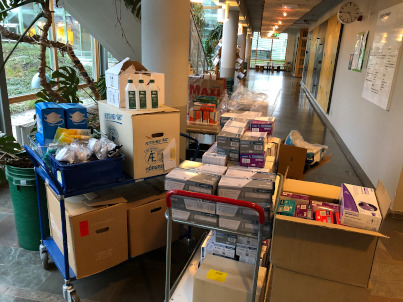 Just over 200 litres of newly produced hand sanitiser, plastic gloves, face masks and other items in high demand comprise the first consignment of disposable items, assembled by chemists at Stockholm University to be delivered to hospitals to help meet current urgent healthcare needs in the wake of the spread of COVID-19.

The Swedish health care system is currently experiencing a shortage of disposable articles and alerts have been issued regarding this problem which has arisen as a consequence of the coronavirus pandemic. The need for protective equipment, such as face masks and disposable gloves, as well as hand sanitisers is considerable. Lennart Bergström, professor at the Department of Materials and Environmental Chemistry, wanted Stockholm University to act on this.

“When the lack of material in the medical field became apparent a few days ago, I asked myself how the University, and especially we as chemists, could contribute”, said Lennart Bergström.

Request for materials to be donated

Professor Bergström contacted Berit Olofsson, a professor of organic chemistry and section dean, and asked what could be done. She then contacted the Danderyd Hospital in Stockholm to find out what urgent needs they had. The hospital reported shortages of hand sanitiser and certain other protective equipment. On Tuesday, Berit Olofsson sent out a request to the natural science departments at the University to find out what disposable equipment they had, which could immediately be sent to the medical service. Examples of such equipment were pump bottles, safety masks, goggles, transparent aprons and protective gloves.

In the e-mail from the dean to the departments, there was a request regarding how much could be spared of the alcohols ethanol and isopropanol, hydrogen peroxide, glycerol, as well as medical containers and bottles. When Prof. Olofsson received a reply from the hospital, stating that hand sanitiser would be especially useful if the University were to manufacture it, the collection of the above ingredients for alcohol production started. An e-mail went out to the different chemistry departments giving the instruction to start production of hand sanitiser, together with a request concerning which employees were available to carry out the work. Positive responses came in rapidly, as well as information on how much chemicals were available.

“The response from colleagues and departments has been fantastic: in just a few hours, more than 250 litres had been collected and more is coming in every day”, said Lennart Bergström. 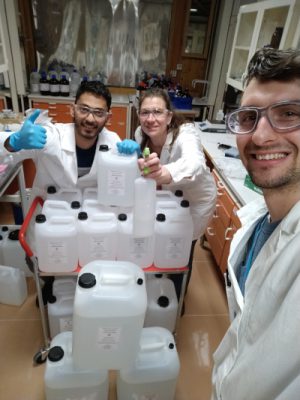 “One reason that the collection of materials was so efficient was the involvement of the University’s local lab safety network. These are people who usually work with lab safety at the departments. They let everything they had in their hands go and began to share the information, collect disposable items and make an inventory of the chemical raw materials supply. The whole group deserves high praise”, says Hanna Gustavsson.

“It is fantastic that the inventory was done so quickly so that we could start the production so rapidly. This is teamwork where many people do a fantastic job”, says Berit Olofsson.

Noted by media and government

During the day, the initiative received attention in both traditional media, such as the newspapers Expressen and Dagens Nyheter, as well as in social media. Matilda Ernkrans, the Swedish Minister of Higher Education and Research, has tweeted about it, describing it as, “an important initiative,” and urging other universities to follow Stockholm University’s example.