Atmospheric research at the top

Air measurements at the highest atmospheric research station in the world 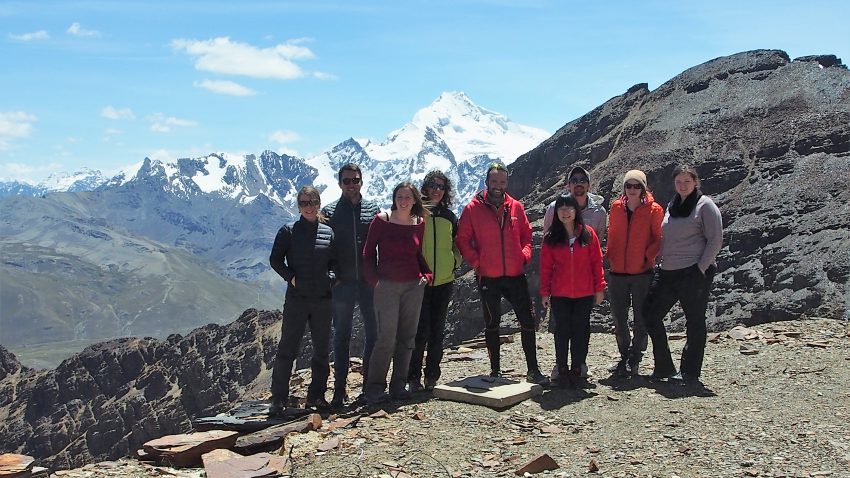 Part of the research team at the measurement station Chacaltaya, Bolivia. Claudia Mohr, ACES, is seen to the left. Photo: Claudia Mohr

A team of atmospheric scientists from the Department of Environmental Science and Analytical Chemistry (ACES), Stockholm University, is currently taking part in a two month project to measure the composition of the atmosphere at the highest atmospheric research station in the world. The station is situated in the Bolivian Andes at 5 240 meters above sea level. 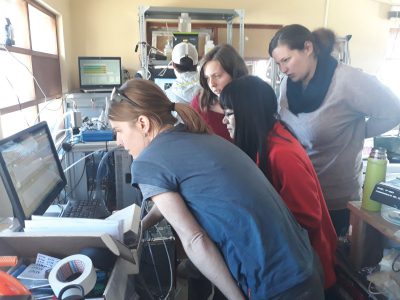 The team has shipped additional instrumentation from their respective labs to Bolivia. Photo: Federico Bianchi

“We have assembled some of the most advanced instrumentation currently available for the analysis of the chemical composition of atmospheric gases and particles at this location, and since the beginning of April we are fully operational. This is no minor achievement, given the harsh conditions the low oxygen environment provides for both the scientists and the technical equipment. All of us here are working very hard while fighting altitude sickness and stomach bugs, says Claudia Mohr, Assistant professor in atmospheric science at the Department of Environmental Science and Analytical Chemistry (ACES).

The measurement station Chacaltaya is situated at 5 240 meters above sea level, about a 1.5 hour drive away from the city of La Paz, Bolivia.

“We focus on the chemical composition of gases and particles in the air at this location, to understand where they are coming from, how they are formed, and how they influence the climate. These measurements are special as they are at high altitude, and in the Southern Hemisphere, locations where direct atmospheric observations are still scarce”, says Claudia Mohr.

The station has been running since 2011 and is reached by air masses from the Andean plateau, the Amazon, and from La Paz, which is a city with a massive air pollution problem. This means that the station is influenced by both natural and anthropogenic emissions, something that is important for this specific research. 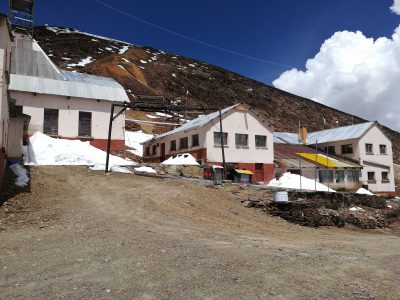 The measurement station Chacaltaya is situated at 5 240 meters above sea level, about a 1.5 hour drive away from the city of La Paz, Bolivia. Photo: Claudia Mohr

“This is a unique opportunity to measure the chemical composition of aerosol particles at such high altitudes. The vast majority of observations in atmospheric research are performed in the boundary layer, but these measurements allow us to catch a glimpse of what is happening further up in the atmosphere, where climate effects such as cloud formation become much more important. In addition, direct atmospheric observations in the southern hemisphere are still very scarce, and this campaign offers a unique opportunity to learn more about natural and anthropogenic emissions, and atmospheric processes that influence air quality and climate in this part of the world”, says Claudia Mohr.

She hopes the research will lead to a better understanding of how gases and particles from different natural and man-made sources interact in the atmosphere, how particles are formed in the atmosphere and what contributes to the growth of these particles to sizes where they can form clouds and influence the climate.

For this project, the team has shipped additional instrumentation such as highly advanced mass spectrometers from their respective labs to Bolivia, some of which are deployed for the first time in such an environment. Already the transport to and the installation of these instruments at Chacaltaya was an adventure.

“It is not an easy task to carry all this heavy equipment at such high altitudes! When we were setting up the instruments at Chacaltaya we realized how tough it is for the body to function under such low oxygen conditions, even thinking becomes difficult after a few hours”.

Luckily the team get to sleep in La Paz, at an altitude of 3 500 meters, and they have two drivers who every day drive them up over the bumpy and steep dirty road to the research station. The team consists of roughly ten visiting researchers from different groups in Europe, and they work closely together with the scientists from the Universidad Mayor de San Andres in La Paz.

“This is an absolutely amazing experiment, with unique instrumentation at a unique location and a unique team of very motivated scientists and students. We are expecting the first results in the summer”, says Claudia Mohr.

More information about the station Chacaltaya can be found here.