A quest for glowing particles inside Arctic clouds 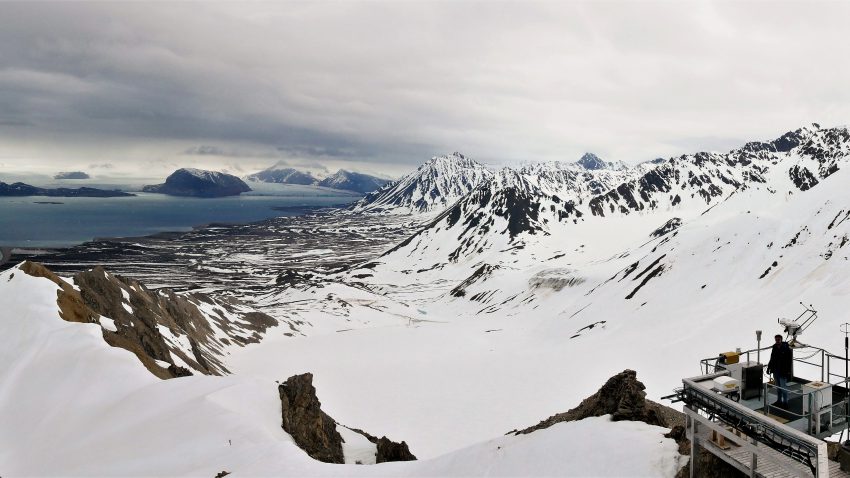 Panoramic view of the Zeppelin observatory, with me standing at the platform. Photo: Tamara Worzewski.

It was 4 AM in mid-June 2019 when I met my supervisor Paul in the lab. We were going to an island in the Arctic. Amongst our luggage was a home-printer sized black box labelled ‘bioaerosol sensor’. A cab was called and we started our trip. A little more than half a day and 2 commercial flights later we were in Longyearbyen, the capital of Svalbard, Norway. It’s incredible how this archipelago in the Arctic is connected to the mainland. To think how geographically isolated this place is and how much time it would have taken to get there 50 years ago. Our voyage so far was astonishingly fast. Waiting for us was Tamara, a science journalist who would follow our work throughout the week. I got a first feeling of wilderness after stepping outside the airport stumbling upon polar bear warnings signs. While we wait for our flight to Ny-Ålesund, the northernmost town in the world, I stood on a rocky beach and dipped my fingers in the water of the Arctic Ocean, while small icebergs floated around. 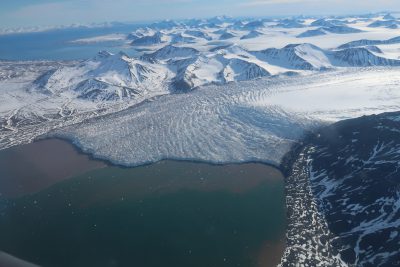 View from the aircraft on our way to Ny-Ålesund. Photo: Paul Zieger

Of all the many places on Earth, the one most affected by climate change is the Arctic. It is warming faster than the rest of the globe due to several coupled feedback mechanisms endemic to this region. Clouds and aerosols play a very important role in this system. The depletion of sea ice increases the open ocean area, the source of sea spray aerosols. These consists of several different particle types, including the ones of biological origin known as bioaerosol. Thus, the presence of bioaerosols in the Arctic air might begin to play a bigger role. A cloud droplet grows as water condenses on an aerosol particle. The microphysical and chemical properties of aerosols are of vital importance for their ability to form clouds. However, the propensity of different bioaerosols in becoming cloud droplets is not well known. Studying bioaerosols and their role in the formation of clouds could provide a link between the retreat of the ice shelf and clouds, both parts of the warming feedback system.

Common to all living creatures on Earth are some basic building block proteins of which some possess a rather interesting property: when exposed to ultraviolet light, they fluoresce. These proteins can end up inside bioaerosols. With that in mind, we acquired a novel instrument called the Multiparameter Bioaerosol Spectrometer or shortly, the bioaerosol sensor. This machine is capable of measuring individual aerosol particles and gather information of their size, fluorescence spectrum and morphology. One way to study the importance of bioaerosols for clouds is to look for clouds in the Arctic whose cloud residual particles glow when exposed to ultraviolet light.

Now our flight to Ny-Ålesund was ready for boarding. Nothing can prepare you for the flight from Longyearbyen to Ny-Ålesund. A small aircraft, big enough for a dozen passengers, mainly scientists like us, and some (very limited) luggage. The flight was very bumpy though we barely noticed when looking at the views down below from the window. Gigantic glaciers and countless peaks scattered through fjords and snow fields. The definition of the word pristine. If you’re lucky to catch a clear sky as we did, you will feel the same feeling of wonder that you read about in fantasy books. 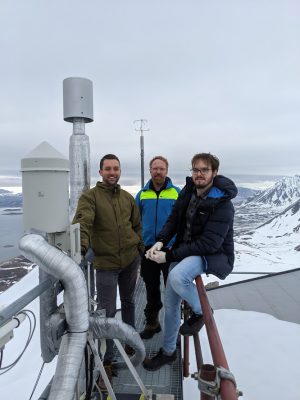 The experience of being in the wilderness was complete when we arrived in Ny-Ålesund, which is situated in the shore of a spectacular fjord, surrounded by peaks and glaciers; where birds come during summer time and whales visit from time to time. You cannot wander alone and unarmed, otherwise nature (polar bears) might get you. Thankfully, another cloud scientist joined our group: Rob from the Swiss Paul Scherrer Institute. Rob is collaborating with us on performing black carbon experiments. We walked through the village to get to our cabins, refraining from stepping over the fragile tundra. Svalbard reindeers were feeding on it and couldn’t care less about our presence. Unfortunately, I cannot say the same about the Arctic terns. Each of us at one point was threatened by one of these mischievous birds. Rumour has it that even the polar bears are pestered by it. I dare say that this is the most beautiful village in the world. What was once a coal mine, is now a flourishing scientific community. Phones do not work there, so you are (almost) disconnected from society. Out of all the dreamy angles I looked, the one that caught my eye was the top of a mountain where a cabin stood. That was Zeppelin mountain and its observatory.

Stockholm University together with its Norwegian partners has a longstanding tradition of measuring aerosols at the Zeppelin Observatory on top of the Zeppelin mountain in Ny-Ålesund. At 79 degrees north and at an altitude of 475 meters above sea level, the Zeppelin Observatory is the perfect place for chasing Arctic clouds. There, our lab has recently installed a unique cloud sampler, called the counterflow virtual impactor inlet or, as we call it, the “cloud hoover”, which uniquely samples the ambient cloud droplets or ice crystals. That’s where we were heading.

A cable car took us to the top of the mountain. I looked back towards the village as we were ascending, and got a better glimpse of the horizon with every meter up the mountain. What a unique place in the world this was! Once at the observatory we began the installation of our instruments.

As the days passed, unique experiences, such as working on the roof while gazing at the immensity of the fjord or getting trapped for hours in the observatory due to power shortage (with no cookies!), began to gather. Some days, after the daily work was done, we took long walks along the fjord to enjoy nature and relax. There’s something wonderfully primal in being in such an environment; jumping over melting snow rivers, climbing snow hills, facing the wind and the cold. One time, we passed through a small valley where we saw polar bear tracks in the snow, reminding us to always be alert. At the end of most of these walks we would find a lonely cabin with an amazing view over the fjord, where we would light up the fireplace and have some coffee. After a week, the work was done. The instrumentation was installed, and both a feeling of accomplishment and sadness came over me as I descended to the village for the last time. And even more so when I started my trip back home, having to say goodbye to this gem of a place. 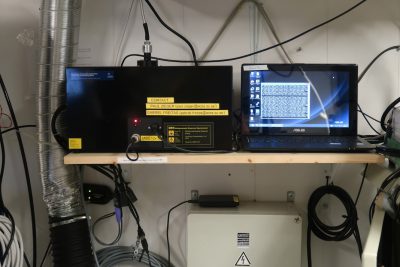 Back in Stockholm the work continues. We are remotely monitoring the operation of the bioaerosol sensor and the other instrumentation at Zeppelin observatory, constantly checking if everything is functioning properly. There is a weird and amusing feeling of working like this. You always feel that part of you is up there in the Arctic looking through a magnifying glass into the particles suspended in air. In these last two months we already saw a few cloud events where significant number of bioaerosols were present. One of them even came from the marginal ice zone, which is exciting. Every day I turn on my computer expecting to be amazed; I guess I chose the right job! But it’s too soon yet to say anything. Our bioaerosol sensor will stay there for an entire year gathering data. It will soon be in company with other novel instruments from our group that will look into the same clouds differently(part of our NASCENT campaign). We hope that this effort will shed more light onto the aerosol and cloud interactions in the Arctic prompting best resolution from climate models for the region. I should get back to my cloud watching, it’s now 18:49 on September 11 and there is a cloud over Zeppelin.

I’m wondering: will the aerosol particles inside the cloud glow?