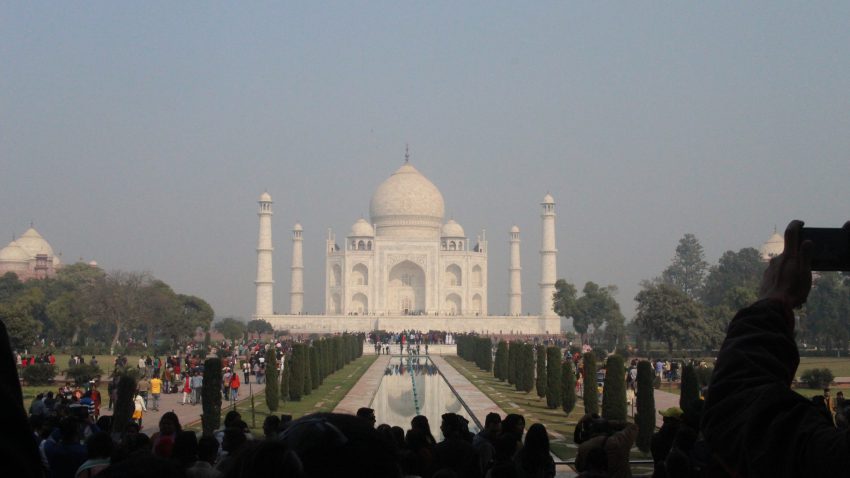 Delhi is like nowhere I’ve been before. The streets burst with people and noise and life. Clothes are brighter than elsewhere; the smells are stronger and deeper and ever changing. The food has more flavour. The soundscape – people shouting, car horns honking and the general background din – is completely unrelenting. It’s an onslaught to the senses. Traffic flows like a river instead of stopping and starting as a solid mass like in Europe. The pace of life is somehow both slower and more frenzied than at home. For me, accustomed to the quiet streets and silent morning commutes of Stockholm, arriving in the middle of the city in January was overwhelming, exhilarating and brilliant.

But it’s impossible to think about winter in Delhi without thinking about the air pollution. This is why I was there: because despite being one of the most polluted cities in the world, very little is known about the thick smog that permeates Delhi life. Where it comes from, what it’s made of, and how badly it can affect health. I’m used to talking about air pollution as something invisible that creeps out of the tailpipes of cars and into our lungs without us even realising it, but the story here is different. In Delhi, air pollution is totally, wholly present. Everything you see is through a haze, as if the saturation has been turned down; a sad irony for a city whose character is so rooted in colour. It coats your hands and your face and the objects you pick up. You can roll the air between your fingers and crunch it in your teeth. You taste burning and sulphur on every breath. 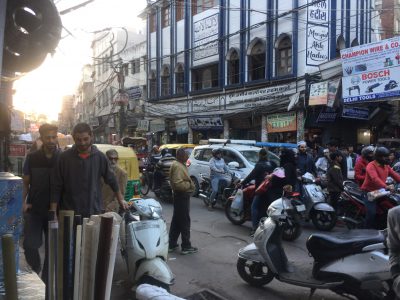 New Delhi is one of the most polluted cities in the world.

We – a team of scientists from India, Switzerland, Sweden and the US – want to find out more about the chemistry in the air here. The pollution comes from myriad sources: coal burning, traffic, brick kilns and agricultural burning. There are small-scale fires on every street corner for cooking, for keeping warm, or simply to get rid of rubbish. When all of these things mix together it creates a kind of chemical cocktail that is set into action with energy from the sun. If we can monitor this closely, we might be able to find out more about what’s being created in the air and how it might affect people’s health. I’ve become gripped by the huge concentration of chlorine and chlorine-containing chemicals that have been measured in Delhi. The concentrations, up to 100 micrograms per cubic metre, are a thousand times higher than anything I’ve seen before and higher than has been measured anywhere else in the world. How does this impact the delicate balance of chemicals in the air around us, though? So far, our best answers are based on guesswork.

Our campaign was hosted at the Indian Institute of Technology in New Delhi. The campus is vast and always bustling with students and staff sitting on the grass outside or gathering around stalls selling massala chai. Palm squirrels with their distinctive striped backs dart with astonishing speed up and down trees lining the main entrance, and an assortment of wild dogs have made the campus their home, navigating the roads and passageways as confidently as any student. Equipment that we had carefully packed away in Stockholm weeks before had arrived before us in their huge wooden and plastic cases, now crammed into the corridor outside a room that had been allocated as our lab. It took days to manhandle everything into position, screw the pieces together and create a complicated network of plumbing to guide the air from outside, into the lab, through our instruments and pumps and then back out again. 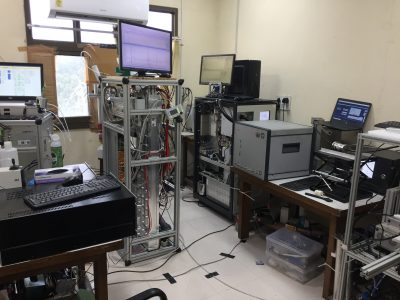 The laboratory is up and running.

By the time we finished setting up our laboratory, the small, dusty room we started with had been transformed. Steel machines sprouting cables and tubes reached forwards for a place at the window to suck in outside air. Bits of electrical cables, nuts, bolts, tubing cut-offs and unidentifiable components were littered across all available surfaces. Sometimes, touching two machines at the same time would deliver an electric shock, and sometimes, unexpected lashings of rain would pour through the open window and drench our delicate machinery. But still, our pumps kept whirring and our instruments gently hummed, transforming the gritty, sticky haze outside into numbers and wiggling coloured lines on computer screens.

One of these lines showed us nitryl chloride, a compound that forms during the night from a mixture of car exhaust and industrial emissions. I could watch the concentrations slowly tick up as the night went on and then, in the mornings, drop when the sun’s energy made the tiny molecules dance until the chlorine atoms fell off entirely. This incredibly reactive element was now loose and ready to attack whatever it came into contact with next, creating a whole new batch of pollutants in front of our eyes.

Humans are incredibly well evolved to handle the airborne particles that we might come across in nature, but the pollution we’ve created ourselves is another story. Particles from combustion engines, coal burning, industry, and those that form in the air itself as a result are generally smaller. They slide past our natural defenses and down into our lungs, our blood streams and our hearts. Quite simply, the pollution we’ve created for ourselves is killing us. In Delhi, it’s killing people at a rate of tens of thousands a year. During extreme events, hospitals in the capital can fill with people struggling to breathe and even mild exercise can cause a person to vomit. Spending a month in Delhi during its most polluted season has made this problem more tangible to me. The routine of checking the air quality index each morning, of staying inside until the worst has cleared, and getting used to the sting in my nostrils has forced me to understand my own topic in a more visceral way than I ever have before. 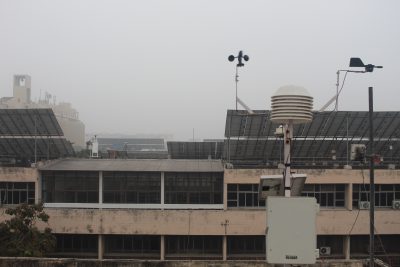 I left India with a month’s worth of data packed away neatly into a hard drive, ready to be picked apart and analysed at home. As we start to look into our results, some of the mysteries that still exist around Delhi’s pollution might start to become clearer. A thousand different factors influence the Delhi smog, which makes it an incredibly difficult problem to solve. However, if we can understand how even a few of these factors work – for example, if we can pin down the extent to which chlorine is multiplying pollution that already exists – it could help to inform the decisions of Indian policy-makers. This, we hope, will be another step forwards in the continued efforts to clean up the Delhi air and once again bring out the colourful, vibrant city that exists beneath the smog.