Toxicological Trade Barriers: Governing Chemicals at the Organisation for Economic Co-operation and Development

Toxicological Trade Barriers: Governing Chemicals at the Organisation for Economic Co-operation and Development

The postwar expansion of the chemical industry and liberalization of international trade resulted in an unprecedented proliferation of chemical products. As the unanticipated global health and environmental impacts of these products became increasingly apparent in the 1970s, governments around the world sought to establish new controls as well as means to coordinate their regulatory approaches. Major international organizations including the United Nations, World Health Organization, and even the North Atlantic Treaty Organization took up the environment as part of their missions. Yet in the field of toxic chemicals, the organization that came to the forefront was an economic one: the Organisation for Economic Co-operation and Development (OECD), an organization devoted to economic growth and composed of 24 industrialized countries. By 1980, the OECD became the major venue where nations convened to harmonize chemical policies and set common standards for evaluating health and environmental risks.

This talk traces the history of the OECD Chemicals Programme, examining how responses to the threat of toxic chemicals and the imperative of economic growth became intertwined. I argue that, in becoming an arbiter of chemical regulation, toxicological knowledge, and scientific practice, the OECD established regulatory frameworks that prioritized economic and bureaucratic over epistemic concerns. OECD nations regulated toxicological practice to control market behavior, which constrained the type of testing done and knowledge produced.

Colleen Lanier Christensen is PhD candidate in the History of Science Department at Harvard University. Her research traces the history of regulatory standards for chemical testing from the 1970s to the present. Using archival sources and oral history interviews, she examines how chemical regulations have constrained what governments could and could not know about chemical risks. Her work shows how the United States and member governments of the Organisation for Economic Cooperation and Development adopted testing standards for the dual aims of protecting public health and liberalizing international trade.

Colleen earned a Master of Public Health from the Department of Sociomedical Sciences at Columbia University’s Mailman School of Public Health, with a certificate in Environmental Health Policy. She also served as a Research Fellow at Environmental Defence Fund, where she analyzed methods for applying systematic review methodologies to chemical safety assessments. Her doctoral research has been supported by the National Science Foundation. 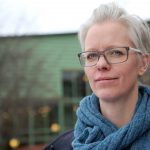 Anna is a professor at Department of Envrionmental Sciences at Stockholm University. Her research focuses on organic contaminants in the environment, with a focus on how environmental systems and processes affect contaminant fate. She am also interested in how environmental risk of chemicals is assessed, and how science can contribute to that process.